We've been so busy lately - painting the house, varnishing the house, sanding the house. Well, not literally - what I mean is that we've done all sorts of stuff. Yes painting, varnishing and sanding, but if I listed it specifically I'd run out of room! And it'd be boring to read. Not that anything I type is of much interest but heigh ho.

So. Where are we now?

The house has been listed with 5 estate agents, and we're trying to sell the Sprinter to get the funds together to rent a place in the UK. It's proving a tougher challenge than we'd thought - there doesn't seem to be very many places to sell vehicles over here. But we'll get sell it - eventually. So much for my big hopes of being back in the UK before the Wolfshead AGM and the release of Eragon in the cinemas. We'll be lucky to get back in time for Christmas at this rate!

Art wise - I've not done an awful lot lately. A couple of cards here and there. I sat in on a cyber class on www.craftzunderthewillow.com where I made a folder album out of 3 sheets of A4 card. Fun, and educational. On www.ukstampers.co.uk there are plans afoot for an online anniversary party on the 24th February 2007. Definitely a date for the diary.


You know how I'm moving back to the UK (well, WE are, but HE doesn't count here), hopefully before the end of this year???? We live in a cultural no-man's land here. Nobody comes here. We don't get concerts, nothing really major, none of the huge craft shows like Scrapaganza or Creativa. The nearest venues for things like that are about 4 hours drive away. Except that at long last, Limoges is having a new "venue" built (called Zenith, but that's by the by) which will hold 6000 spectators. Kinda looks like a pill-bug curled up. And I says to DH "You watch, there'll be loads of really good gigs and stuff happening." Well, I picked up the freebie paper today, had a scan through in general, and came across a half-page ad for Zenith, with all the forthcoming attractions. Lo and behold, on the 18th March next year, my FAVE bloke is putting on a concert at Zenith. Not that any of you will know him, but his name is Garou, he's French Canadian, and drop dead gorgeous with a fantastic voice. I wouldn't kick him out of bed - he's a kind of French Robbie Williams. And he's a month younger than me - god that makes me feel old!!!! 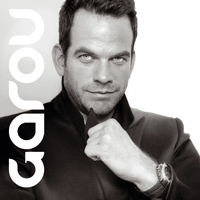