The Lionman - and a Tiger Card

Ok, so I've not been around for a bit - I've been busy! It's re-enactment season, and I've a lot on.

Anyway, onto something important! I have a cause I support - The Lionman aka Craig Busch. Those of you that have Sky TV will have either heard about or seen a TV show by the same name. I absolutely love this TV series, and I love the rapport that Craig has with his animals. What many people don't know is that he no longer works at his own park, Zion Wildlife Gardens. There is a long story behind all of this, but it is best that I point you in the direction of his Facebook page, where it is all explained. The recent tragedy at ZWG where one of the keepers (Dalu) was killed by a white tiger (Abu) brought Craig's troubles to my attention, and his fans on Facebook have more than doubled since the end of May when Dalu and Abu died.

There are people who are pro-Craig, and others who are anti-Craig. Should you, the reader, choose to go to the Facebook page, I will leave you to make your own mind up as we are all individuals, and I would not want to force my opinion on you. Suffice it to say that I support him, and want to do all I can to help.

To that end, a few weeks ago I promised that I would make some cards to sell, on an animal theme. I've been rather busy, so have only just got around to making any (I've also had to wait for stamps to show up!). So here is my first card. I thought I would do a white tiger card as my first one, in memory of Abu. I have put this up for sale on Ebay . All monies raised from the sale of this card will go to Craig to help get him back into ZQG. 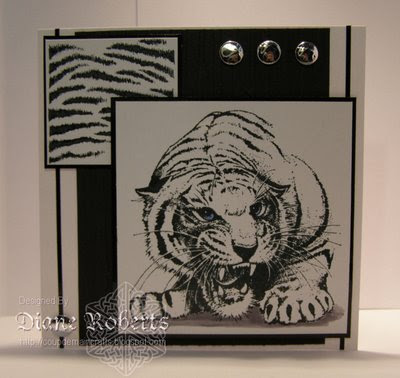 I don't often get the time to do the Sketch Saturday sketches - but I do love them!

The lastest one was another lovely sketch, and here is my effort! 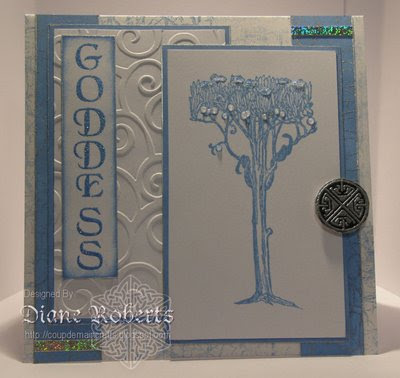 I think the stamps are by third coast rubber, but I'm probably wrong, and someo
ne will come along and correct me soonest! Background stamp is the crackle background by Craft Individuals, and the swirls stamp is Hero Arts (old faithful!)

And the Cuttlebug divine swirls too...
Rambled madly by Morti at 9:22 pm 5 more Mad Ramblings