Well, hello hello HELLO!
Welcome to another weekly round of WOYWW.  I'm still having trouble with posting comments as on some blogs I only seem to be able to comment at home, so it may take me a while to visit some of you!
If you haven't got a clue what I'm on about go HERE for all the deets, and the fabulous Mrs Dunnit will let you have a snoop about....
So, what goeth on in the world of Morti, eh?
Not much.  Too tired for much!  We've all been hit by a bout of post-panto sickness - namely colds and chest infections.  I think that might be down to a bit too much smoke from the pyros they used, but hey, what do I know?  LOL.  Nonetheless, we are bright spirited and happy.
On my desk this week we see the beginnings of a card for a colleague at work.  Having epically failed to find a large, plain Good Luck card which didn't say Leaving or Goodbye or Retirement or Exam, it befalls me to make one that says "Good Luck in Hong Kong".  See, the colleague isn't actually leaving the company, he's going to head up the Hong Kong office as they are sorely in need of someone over there who can make command decisions and take them to the next level.  Go, Dean!  And that's where I step in, as chief card maker.  Having won the card competition (by default as the only entry!) I get the poke in the ribs.  No worries.  Watch this space.  I see a golden chinese dragon coming up. 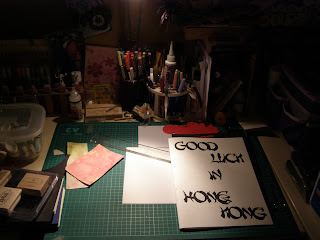 As for the next few weeks....well.....ever the suckers for punishment, PVADS held auditions the day after Panto finished, for the spring play "The Darling Buds of May".  Mr B desperately wanted to do it, auditioned, got THE main part.  Muggins here went along to support, knowing darned well it's the only way I'll get to see anything of him when he doesn't have his nose in a book.  And wound up landing a role too.  Deep joy.  So much for quiet Wednesday & Sunday evening.
But then you can't argue when your fella gets presented with THIS after the Panto at the party - for The Defining Performance.  Or rather, as they put it, they presented it to his leg, for having gone through hell for his art..... ROFL..... 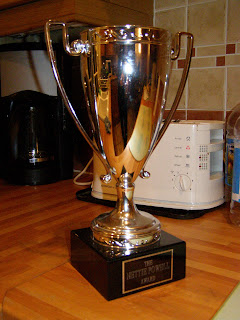 In all seriousness though, it's a genuine award PVADS gives after each show they do, if they feel that something or someone has warranted it, and Mr B was one such individual who took the panto and the society to a whole new level with his performance as Long John Silver.  People were coming up to members and asking where he'd hidden his leg, and was he really one-legged etc....LOL.... Bless - I'm so proud of him.  And it wasn't without cost - two shows on the Saturdays and by half-way through the second he'd about had enough, his knee was in a lot of pain.  He soldiered through though, and seems to be ok now!
So, watch this space......... catch you all around!
Rambled madly by Morti at 5:34 am 31 more Mad Ramblings

We're back for another session of WOYWW and this week for me it's decidedly Zzzzz.  Well, that's what you'll all be doing after seeing this oh-so-dull photo of my desk. Nothing exciting to report this week, other than the making of one Thank You card as a sample for Mr B because he needs to make a fair few in a hurry. On Thursday. 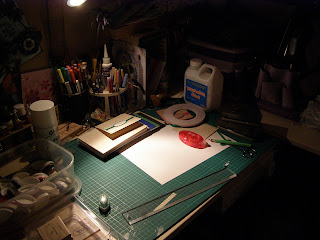 It's also a bit Zzzzz because we're all tired after the weekend's three shows - we have a mid-run rehearsal tonight and then three more shows at the weekend coming.  Followed immediately by a post show party, and then we strike the set on the Sunday morning.  Huzzah!  I want my Sundays back.  I love panto, but Sunday rehearsals are a real bind.
That's my lot though - for more delightful desks, visit Dunnit the Desk Diva where you will find some interesting diversions for your day.... ﻿Mind you, last week I was tearing my hair out because about a dozen of your lovely blogs just froze on me, and I could only read, not comment.  I think it was an issue at work, so I'll try and do you folks first this week!
Rambled madly by Morti at 5:57 am 29 more Mad Ramblings

Another week, another WOYWW....  head via the link to Dunnit Dimensions and let the desk -hopping commence!
For me, a short post this week as my desk hasn't changed an awful lot.﻿  Apart from some new stash I bought on Saturday from Shopkeeper Gal before heading off to the crop.  Some nice bargains too - a fab stamp of Venice for starters, for just £1!  She's also started stocking Craft Stamper, which is an absolute bonus because otherwise I have to go all the way to Amesbury for it or buy it online - nowhere else locally sells it (and I'm too lazy to ask my corner shop to stock it). 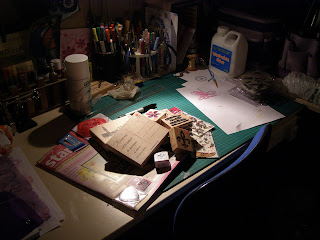 The crop was fun - I didn't actually do any cropping - instead I made a trident for the panto.  Here it is in it's finished state - on my real workdesk this week because I've been painting it in the kitchen where the light is better and there's space to lay it out.  Made from a broom handle, multiple layers of double walled corrugated cardboard, some specialist road tape (don't ask!), four Maya Road chipboard scrolls, and silver and copper paint.  ﻿ 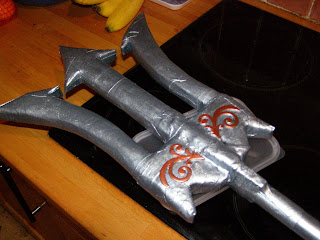 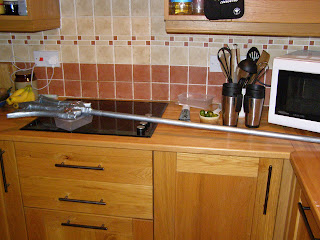 And here's a gratuitous shot of Mr B as Long John Silver at rehearsals on Sunday.  ROFL.  We did an entire day, and by the end of it, he was exhausted.  We all were. 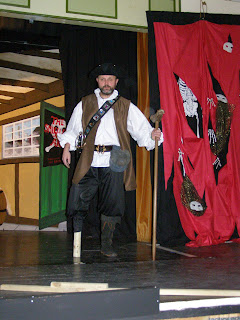 WOYWW 135 - Panto season! or, the one where the desk goes vertical

Here we are again - WOYWW has hit us headlong into the New Year, so I hope it is a happy one for all of you!
It's that time of year again.... oh yes it is....oh no it isn't.... sigh.  I can't resist it...
Anyway, my desk this week has been mostly vertical, as I have been helping my good friend Nettie and her partner Rob paint the scenery for Treasure Island.  Nettie does the big stuff (scares the crap out me), Rob blocks in, and I've been making stuff look round, like I do.  I give you exhibit A: 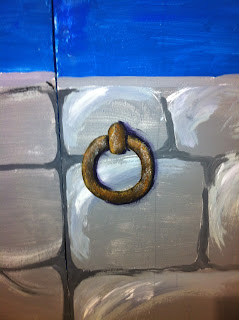 exhibit B (we need baskets, they said) : 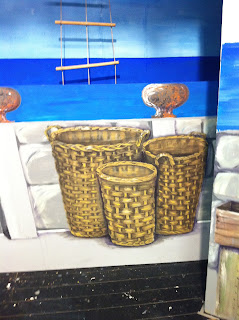 Bigger view of what's going on - I've just been adding depth and shadow and stuff, and not working on the big bits.  Sorry they're blurred - it's me iPhone you know! 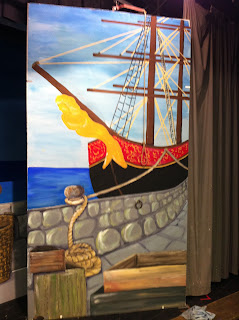 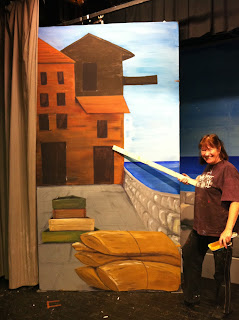 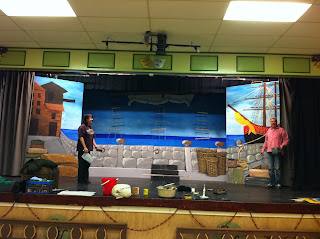 But my desk hasn't only been vertical - Tuesday night it was definitely horizontal and I have just finished making two maps for the panto. Treasure maps of course. And here I say All Hail the Duke of Distress - for t'is his inks wot made it possible. All done using a black Sharpie, and the lovely inks Walnut Stain, Rusty Hinge, Faded Denim, Peeled Paint, Festive Berries and Black Soot. Ta Dah! Makes life so much easier, and so much more realistic, than using a tea bag, dontcha think? 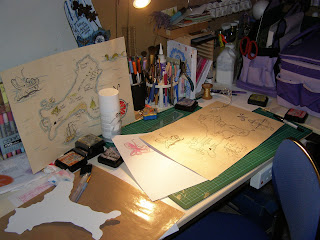 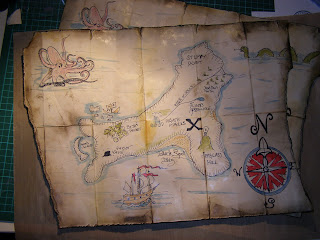 Oh, and if you're interested, the island is based on a slightly stretched Christmas Island.... LOL.  Had to be done, really!
Catch you on the hop...... Arrrrrrrrrrr......
Rambled madly by Morti at 12:45 am 32 more Mad Ramblings