I've recently completed a set of Inchies for the UKStampers forum swap. I did actually make 26, but failed to take a photo of the whole lot together. You'll have to make do with a photo of 25 of them for now - thanks Sid! - the 26th one is being sent off with all the others for publishing in a magazine. 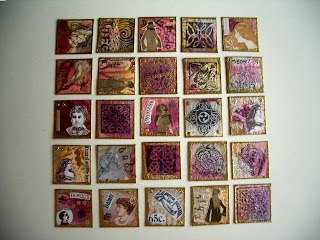 Otherwise I've been spending a fair bit of time stitching a couple of other projects, and working in my new job. More on that when I have the energy to expand on that topic!
Rambled madly by Morti at 8:01 pm 2 more Mad Ramblings

Oh dear - I have rather left it a long time between posts, haven't I? That's not to say I've not been busy, either. Just that my computing Mojo upped and left the building.

Well, for starters, I've been working. My first full time office-based job in nearly 4 years. It's taken a bit of getting used to - going back out to work, but the money is very welcome. The hardest battle has been with tiredness, but I'm starting to conquer that. The other battle is that it's left me with very little inclination to spend time on the computer in the evening, as I'm staring at a computer screen all day. Again, we'll conquer that too!

Crafting wise, I've not done much either. I'm working on a stitch-a-long (referred to as SAL from here after) with a group of buddies from the CUTW forum. I've also done this.... 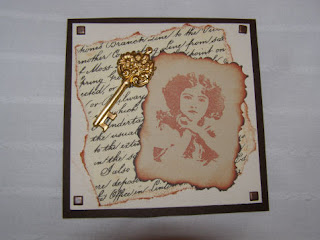 for the March Topper Swap on Aunty's Forum. The recipient - Jaine - absolutely adores it, which is the most important bit of all! The funny thing was, I was totally stumped for what to do, so I left it, and left it. And one day last week thought - "Right, 5 minutes, lets see what we come up with". I rummaged through my stash, and found the stamped image of the girl, already done on sable coloured card in a russet brown. Next I found the writing background paper, and the key, and the whole thing just gelled. A square of cream card, a square of dark-brown card, four square antiqued brads and some brown and black ink later - voila! A quick topper that just fell into place. The reason Jaine loves it so is because she adores Earth tones - I didn't know this till I saw her post on the forum gallery along with the picture of the topper. Happy co-incidence!

I've also received my ATCs from the swap I made the ones shown on here for - I'll try and photograph them tonight to include.

Something else I made a couple of weeks ago, but haven't put up yet, is this.... 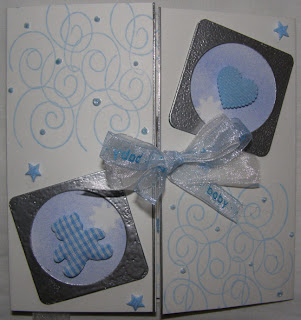 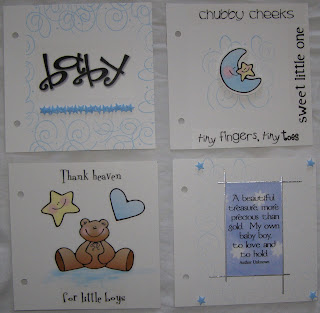 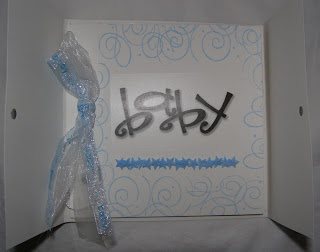 It was part of the Five Swap on Aunty's Forum. I was sent some baby stickers, blue stars, blue "baby" organza ribbon, puffy shapes and a couple of slide mounts. In addition I used a book-card I'd made, a Hero Arts swirl rubber stamp, blue ink, white organza ribbon and some silver EP. I love it - now I'm waiting for someone to have a baby boy so I can send it!
Rambled madly by Morti at 3:46 pm 0 more Mad Ramblings