I failed to get round many of the desks last week.  I think I might just have made it into double figures before life and teenagers took over.  And then there was my complete inability to post anything up on the blog since last Wednesday.  I hang my head in shame, cos it's not like I didn't do anything all week.
For a start, this little guy was born last Tuesday (they're our neighbours) and I didn't get a pic until Thurs, and that was useless, and I've managed to get one tonight because they've been right by the fence for the first time in an age.  Cue cuteness... 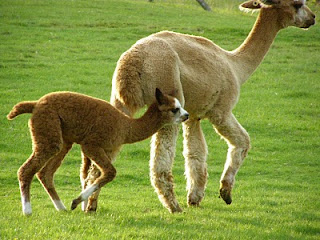 So, going back to WOYWW, here is my desk this week.  Marginally tidy, the bunting has been posted and I've got photos to share in a day or two - once they've arrived at their primary destination.  Current projects on the desk are STILL the CJ, of which I may show the front, the owner's page and my own at some point this week, but I cannot show anyone elses work because after all, it's meant to be a bit of a surprise for the owner!  ROFL.  The other project are some paper beads that are for someone in particular and are well overdue, so I figured I should crack on with them! 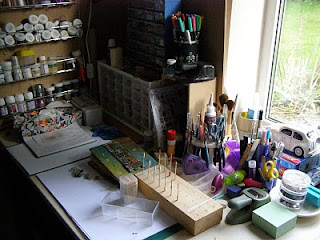 Now, this second photo is what my craftroom looks like if I peer through the window to take the photo. Seriously. If I tried to take this picture from my desk you'd see shelves one through three and that's it. I told you guys it was cosy in there! Shelving to the left is generally for office type stuff (cos that shelving unit is behind the office desk, rocket science, eh? LOL ) and the other one is craft stuff. And music. Because, believe it or not, lurking BEHIND those shelves is my piano and music stand and assorted other instruments (tambourines, recorders, flute, drum, guitar....). We believe in really making a room WORK for its supper. 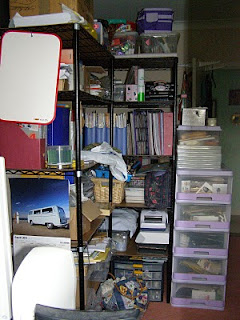 For more such desks and rooms, go and peruse the blog of the great Ms Dunnit for more info!

Other events this week have included me applying for and sending off the paperwork to start my English A Level. I have three already (Biology, French and Art) but I want to "change my stars" as is said in A Knight's Tale, and this is where I am going to begin. Well, no, that's not strictly true. I started changing them back in February but you'll have to go and find this post  to understand.  And subsequent ones too.

We also went to the Corsley show and marvelled at a) how few entries there were to some of the competitions, and b) how many competitions we could collectively win if we could be bothered to enter.  Photography looks like being a good one next year for starters...hehehehehe.  Mr B's eldest girl (and it's very complicated so I won't explain) came to stay.  We bought a Wii.  Mr B bought clothes for school - for himself.  It's amazing how teachers go through the knees of their trousers.  And ruin ties.  It was an expensive weekend *cringe*.

Cute neighbours....and I had a fab snoop this week.

hi and thanks for visiting me this week, love the look of your work area and wow it sounds like you have lots going on in your life, and finally aaarrrrggghhhhh for the new arrival :)

Oh very cute neighbours, way cuter than mine at any rate!! That's a busy work room and desk you have there, talk about multi tasking!

Sounds like you really DID have a busy and expensive weekend. Ties cost more than pants, sometimes. I was amazed when I bought one for a friend.

You really do put a room to good use. Not a bit of space is wasted. Love paper beads, so I really like your setup. Happy WOYWW.

Those are the cutest neighbors one can have! And very nice workspace.

Wow, you DO pack a lot into a small space! Love your neighbours... cute and cuddly.

Hay D, love your window shoot, i did wonder how big the room was coz it looked narrow till i saw you had 2 desks, cant believe there is music hiding behind all your stash though..doesn't look like it would fit lol

Question.. what the heck is that bit of word.. are you by chance making beads or something?

That is one busy room. Love your neighbours.

New clothes for school - made me smile! Your room is certainly giving you value for space - and er, how may jars of embossing powder?!!
Was it you that asked me where my local LSS in Wiltshire is? If so, it's Kraft Crazy in Tidworth 01980 844010. If not, sorry to force it on you!!

LOL... you have managed to get almost everything going on in there, haven't you? Cosy is it? You are obviously a hugely talented and dedicated person... so many interests!!

Ah but that cosy space is YOURS and therefore priceless :) Love how you have maximised it completely!

Love your crafty space. You've optimised what you've got. :)

Hi Morti! Your Copic's should colour just fine, some people like coloured pencils, or even crayons. I love my Promakers! Or there's also PaintNet, it's a freebie! Better than Paint, which may already be on your computer, as it covers better. So then you can colour without actually using any paint and only print something when you are really happy with it.
If you google PaintNet there's loads of places where you can download it for free! Another freebie, is the Gimp! I have them both, and I'm still learning about them.

You have a great crafty space! Loads and loads of crafty lovely-ness!!
(Lyn)

HI Morti, Thanks for visiting my not so messy desk.

You asked about the images I am using. Which ones in particular are you interested in? I use a lot of digi stamps from Mo Manning and Sassy Cheryl, so it could be those you are referring to??

WOW just read your Feb post and really admire you for taking the new fork in the road. I did similar about a year ago and its paying off. Good Luck with the A Level, Hazelxoxo

Hiya Mort...Looks like SO many cool supplies to work with. What a lovely neighbor you have. Less vices than human neighbors or more? Thanks for visiting. You asked about the image I had on my desk...you can see what it's for here: http://www.amberink.com/products/clearstamp-oh-what-a-doll-wave-hello She only had beach ware, so with fall coming she needed something warmer! See you next week.

Marginally tidy? Are you kidding me, this is a very, very tidy desk. If it didn't look so creative I'd be annoyed!

Thanks for sharing and never worry about not posting. We all have lives and sometimes blogging just has to take a back seat.

Have a good one.

You are certainly organized and I think Miss B card is brill. ikki

tee hee you do indeed pack alot into your craft/work room - just trolled back through your blog to see more and wow what a lot you've got!

Love the beads sitting on their cocktail sticks. :)