See what I did there?  I caved and put the week number.  I figured you guys'd get fed up with the WOYWW "You might like this" links at the bottom of the post if I didn't say which was which.

Anyway, I digress as usual.

First things first though, I must say a big welcome to Needlewings and Spyder as new followers on my blog - thanks guys!

Here we are at WOYWW (and for more info and well over a hundred desks by the end of the week, pop over to Disappearing Ms Dunnit's blog), and I'm pleased to say I got around to every single desk last week.  At least, I think I did.  LOL.  Did the last one at about 8.30pm last night! If I did miss anyone, it would have been because of the link colour change thingy and switching between home and work and.... oh well, my intentions were there.

My desk this week doesn't look much different other than the fact that a) I've moved the wooden block with beads on (which are now completed) and b) I have lamps.  Got to have lamps.... actual WIP was finished WIP (WF?) at about midnight last night (when I took the pics). 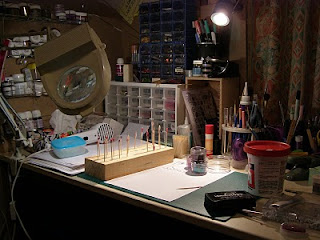 And here we have a *slightly wonky* gratuitous shot of the brad/eyelet collection..... 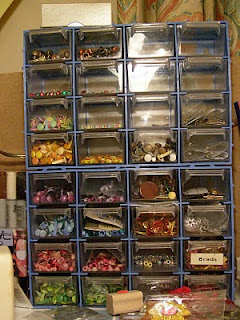 Interesting point of note - the drawer that actually says "brads" was originally the ONLY drawer with brads in.  They fast became an obsession....
I've finished the paper beads I was making, and they'll be off to their recipient today for her to coo over - I know she likes pink. 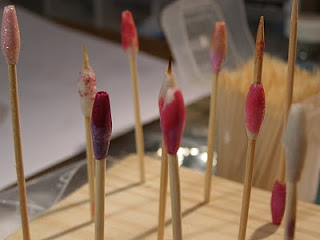 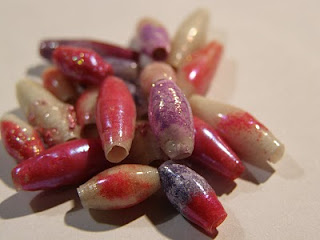 So - that's my desk - I'll probably come back and tweak this in an hour cos I have to head off to work now, but after that, it's investigations in the the desks of the rest of you WOYWWers....
Rambled madly by Morti at 6:58 am

Love your collection of brads. I have a few (ahem) too, but not THAT many! Those paper beads are gorgeous.

I have a package of about 20 brads, so I would love to come run my hands through yours. They look so inviting all color coded and all.

And I really love the beads. They turned out super duper and shiny. Happy WOYWW.

Your desk looks spookily inviting! Lots to snoop. Love all those brads and your beads are great,
JoZarty x

Fab brad collection and I really love the beads you're making.
A x

Fab desk, those beads look great. Thanks for the snoop round.

Love the beads and fab collection of brads.
Elaine

The beads look great Diane, think i may have to make some more of those soon, i already have a bag of pre rounded ones just waiting for utee lol

This looks like a lovely creative space. Love the beads too :)

Oh I do love those beads. sooo pretty. But Blogger is seriously narking me off with the Service Unavailable messages. But I am determined to comment when I see something this nice. Three tries but hopefully it will get to you in the end.

Hi there, love your desk it's so well organised, I have never seen as many brads as that! outside a shop that is:)
Your beads are yummy, a lovely technique and beautifully executed:) xx

I have a brad thing too...so I understand!

Those beads are stunning

Love the beads, and are you sure you have enough brads there!!

Evening Morti,
Lovely beads and your thing about brads is funny, I used to use lots of brads and now I think they are in little pots somewhere in all my stash. The only ones that come out to play are the pearl or diamontie ones.
Thanks for the snoop. Have a nice evening Hugs Jo.

Great beads and what a lot of brads !!

Wow..that is one lamp and a half..or is it just the angle of the pic - Lovely beads...Happy WOYWW...Esther xx

Wow what super beads, love them!
Great brads too, thanks for sharing your WOYWW, hugs Heidi xx

Er, can I have all those brads please? thanks ;-)

Those paper beads look ace too, I read about them in a beady magazine a while back. Yours look better though!

Great collection of brads and beads, wow and those hand made ones! Fab workspace, Happy WOYWW, thank you for showing us your workspace

Love those paper beads and great collection of brads there, I have found most crafty stash is addictive!

wow what a huge collection of brads!

Beautiful beads! Are they clay?

WOW, you have a lot of brads, I love your storage system.

Ah, Morti, I see now how mad you are. The brad thing - how many other obsessions, huh? After all, there's embossing powder already....
Love your dedication to your friend's love of pink, handmade beads - you must feel a therapy in the making..I know I wouldn't!