Well, I did say I'd put up a pic of her page when I'd done it.  I can't put up pictures of the whole thing because I didn't take photos of the other pages.  I believe she's going to put them up on her blog when she gets a chance.
So, here is the photograph of my page... 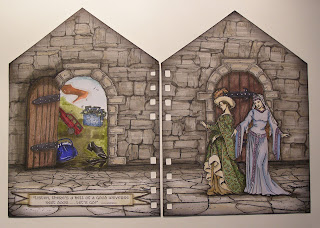 I've elected to show a picture of it after I'd cut it in two and re-cut the holes for the BIA holes.
So, what did I do?  first up, Flo's CJ came with the door in the stonework, one open, and one closed.  We had an option to use either one, or both.  I did a search on the web for quotes about doors (they are often inspirational, and in this case, quite inspired!) and came up with this one "Listen, there's a hell of a universe next door - let's go!" by E.E. Cummings.  Knowing my love of medieval everything, this just appealed to me, particularly in our current world and being aware of how much us re-enactors are into still having our mod cons (a couple of us carry around gas fridges to events!  LOL) ﻿ it kind of went without saying what I was going to do.  Took me a while to get to this point though, LOL!
So, my two medieval ladies were stamped first using Memento black, and then masked using post it notes.  I followed this up with stamping and masking the two doorways.  Well, two pages, just HAD to use both stamps!  I then stamped the floor - I have a fab stamp of crazy paving.  Daft me though didn't carry it through the open door so I wound up doing that manually later... I think I worked it well though.  After that, I masked the edge of the floor off and stamped the stonework.  The stamp I used for that is pretty small, so I'm going to have a hunt and see if I can't find a decent sized background stamp that'll do the job much quicker in future.
Once I'd done that I cut out the open door way and stamped the shoes, bags and car into the "universe next door", and tried to create a bit of a landscape. I was rather constrained by the stamps I had, but I hope I achieved the end result, even if it's not perfect...
Lastly, the whole lot was coloured using copics.  As you can see, most of it was done using the grey tones W1-W7 and black 100, but I also used the skintones, and a pale orangey colour plus varieties of blue and green.  After I'd finished the main work I cut it in two, put the holes in, and then went round the edge with Black Soot DI to just take the cleaness off it.  I also printed the quote, cut it out, stuck it down and added some shadow using copics.
I personnally love the end result, and I know Flo loved it (cos she said so on UKStampers - hun, you are SO welcome, it was fun to do!).  I do look at it now and see where it could have been improved - the light coming through the open door should leave a defined shadow where the wall blocks the light coming in, but that is just something I've now learned and can improve on for next time!
So, when is the next one starting.......... ??
Rambled madly by Morti at 5:26 pm

Too right I loved it, it's brilliant!

That crazy paving is a stamp? oh oh I want!!! where did you get it from??