Woooooooooo...... it's here.....  The Big WOYWW Crop.  Can you imagine a 40 year old woman running around her lounge with her t-shirt pulled up over her head like an over-excited footballer?  No?  Me either.... LOL.... but that's about how excited I am.  I have Doone and Jozart coming to stay which is a scary prospect.  No, that sounds wrong.  It's a daunting prospect, as they are both such amazingly creative people..... will I measure up?  LOL.  I have a secret weapon or two, in the vague shapes of Mr B and Hamish.... hehehehe....


Anyway, you're no doubt here to see my desk, not read my witterings, so without further ado.... 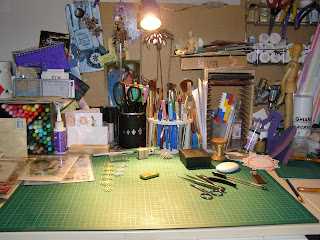 One desk.  Not looking an awful lot different to last week, but I can assure you that Stuff has happened.  And also not happened.  The domino I was working on last week hasn't actually been finished yet, though it will by Saturday.  Providing my screw-eyes turn up.  Funny how you don't always know what you need until the very last minute.

See, we have a finished Christmas card!  I took Janet's recommendation to put in some dark card, and also surmised that I did NOT like the medallion in a base of white, so did it in cream instead.  Added some distress ink to...um...distress it a bit...  and there you have it. 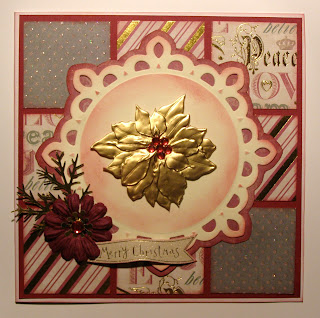 It's also Mr & Mrs B Senior's wedding anniversary this week, so I took advantage of the current Sketch Saturday sketch to make them a card.  Here is the card and there are just a few more deets here. 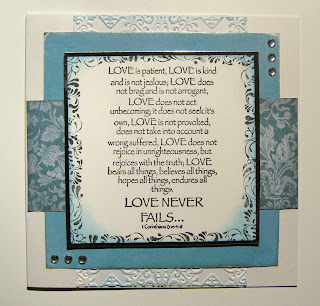 The quantity of crocheted squares is gradually increasing.  I'm hoping to add a few more colours at some point!  That green, whilst pretty, is a bit dull... 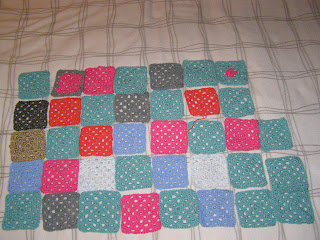 And that's your lot for this week.  By the time we do all this again, we will have had The Crop and eaten lots of yummy things like this.... 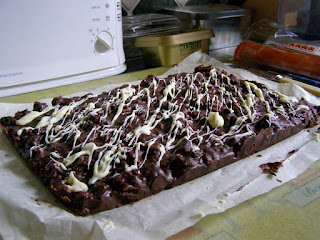 I hope you have a great time at your crop, so loving that card you have made with the poinsetta's is that a die?
Have a great WOYWW

Your xmas card turned out fabulous. I am crocheting some squares at the moment too.. What is the yummy thing at the bottom with all its delicious chocolate goodness. Hope you have a lovely visit and have a wonderful time. Sandy :) #65

You will love Jo and Donna and the three of you will sit up and chat and chat and chat.
Lots of loveliness on your desk this week, the cake looks yummy, the cards are gorgeous and bet the dom is too when it is finished.
Have a wonderful weekend.
Thanks for sharing -
Hugz, Neet 29 xx

Busy world at your house this week. Nice clean desk though! Love the cards, the squares and what is that yummy chocolate thing...Wish I were going to be there to partake of the awesome chocolaty goodness. Have a lot of fun, take a lot of pictures and share next week. vickie #41

LOL, you are excited! And of course you'll measure up..and anyway...they won't have time to put you to the test...they'l be too busy rummaging through that room! See you saturday for fuuuuuun!

You are one busy bee at the mo and no mistake! Hope the eyes turn up in time and you have the best of weekends. Hugs, Buttons #82

Love your very pretty and creative cards! The chocolate looks wonderful too, just don't get any on your cards! Enjoy WOYWW. Karen T 90 x

Looking forward to meeting you for in person ramblings... you have been busy, the cards look great! Helen, 6

Hi Morti
Rub it in why don't you! Not only can't I make it to meet you all in person but I also can't eat cake!!!! I am really feeling hard done by now!!! Hope you all have loads of fun and want to do it all again soon so I can make it this time! Happy WOYWW to your from Helen 57

Oh - can't you send us WOYWWers who live further afield some of the leftovers?! Enjoy your day out on Saturday,
Bernice #5

You certainly have had a busy week Morty and an even busier one coming up by the sounds of things.
I’m so envious that you are all getting to meet up and would have loved to be there if I wasn’t way down in the South East but you never know, maybe next time. I’m sure you will all have fun.

have fun at the crop,am that cake looks yummy :)
have a great woyww
kay #48

Jo is not quite five foot and I am not much taller - I think you will measure up just fine, and it is us that are honored to be offered bed space...

Hi Morti. Love your workspace and that Christmas card is lovely. I am trying to crochet am baby blanket but not having much success. It keeps turning out like a hat, I just can't keep it flat.
maybe I should just make squares ?

You know? Funnily enough I CAN picture you acting like a teenage footballer...

Well if that goey, yummy thing is going to the crop we will have to beat WOYWWers off with a stick. Bring it on.
Like how you finished the card and your super tidy, organised desk.
See you sat
janet #49

Oh you've got to have fudge at a crop! Love your cards and I think the dark colors make the card pop looking fantastic!Tamika #14

Only 3 more sleeps! I'd better go do some food shopping... *grin* The tiffin is looking rather lush...slurp xx
I bet the day will whizz past in a flash. There'll probably be crop overload next week!!
Hugs, LLJ #50 xx

Oh you lucky girl...I hope you have buckets of fun at the crop...your baking looks yummy!

Your desk looks so tidy...patiently awaiting a creation!

Hope you saved me some cake Morti!! I'm here late enough that you'll all be back from the crop.... or down the pub!!! Hope it all went well, I've just been bugging Julia on FB for an update!! Sad or what! Love the clean desk, hope the guests were impressed. Also love the card, mounting on red was just perfect.

My name is Cindy said...

I'm just about to eat some of that cake......
Lpovely to see you yesterday, Cindy