Once again, it’s time for WOYWW – the weekly blog hop that sails round the world on the desks of the creative masses. For more deets go to Stamping Ground, where you’ll find a fab list of some of the best messes spaces ever!
I’m a bit late joining the party this week. I’m utterly WOYWW’d out. Or Mojo’d out. Not quite sure which. All I know is that last night didn’t pan out quite the way I’d forseen it (namely having been abandoned by all and sundry to sleep by 8pm) and I just didn’t have the energy to think about a post for today. Although that might have something to do with the chocolate fest that kept me company *blushes*.  Nor did I have anything on my desk, not having had the mojo to sit and create stuff.  That's not to say I've had a non-creative week, I did make two Mother's Day cards, and a Birthday card, but I don't have the photos of those to hand at work!
So today, you really get to see my workdesk – and on it we have cables and microswitches as well as invoices and a cup of coffee. Deep joy. What this means is that they need to get a part out to a customer, and it’s all hands to the pump to get it out on time. My task? To join the cables in the bottom right to the switches in the top right, giving us the united components on the left there. It’s not much fun – it’s quite tough on the old fingers as the male/female parts we have to put together are an extremely tight fit! 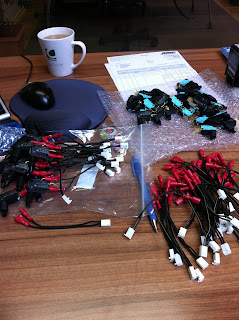 However, to cheer you up (or perhaps me?), I have to share with you a couple of fun moments from this week.
Firstly, we had Grandad B staying with us, and as Lil Miss B was visiting her real-Mum (we’re having Mother’s Day a week late this year), he took us out for a meal.
I opted to have the grilled Goat’s cheese for starters. Grandad B asked me what I was having, so I told him. He didn’t quite catch what I said, so I repeated it for him. Later, he told Mr B that I was having “goose” cheese, but he didn’t know what that was like…. ROFLMAO. Poor Grandad B – he is a trifle deaf and does wear a hearing aid.  * Remind me to tell you about the Smacked Mackerel Pate one day.... 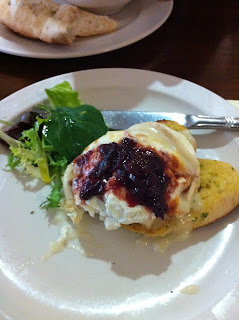 The second chuckle was a result of something that we usually do with Lil Miss B. - to make sure she has heard and understood instructions, we usually ask her to repeat them. This particular chuckle happened later on Sunday – Lil Miss B wasn’t coming home until Monday morning, and we were both going to have left for work. It suddenly occurred to me that she might not have her keys, and when I sent her a text asking, she said no. So, this was how the text conversation wound up.  It doesn’t read quite as funny as when it happened, but is always worth a haha… 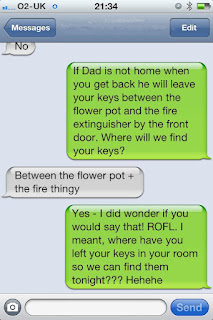 And lastly – look at the shop that is in Andover – Sarah, is there something you’re not telling us? LOL 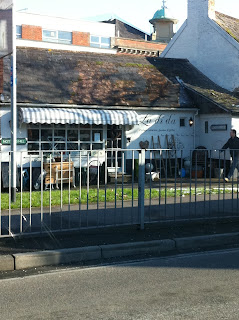 Hope to catch up with a lot of you on the hop today - but as I'm late joining, I think you all have a headstart!
Rambled madly by Morti at 1:29 pm

Well, I declare, male and female parts in a tight fit... I came over all unnecessary! All I can say is hope your fingers have recovered..this gets worse doesn't it, lol!!
Hope your goose cheese was tasty - how do you milk them??
Hugs, LLJ #68 xx
PS Sorry for the above, I'm in a really stupid mood today :)

Rather you than me with the cables... LOL at Grandad B and the Goose cheese... my poor old mum was very deaf and often refused to wear her hearing aid, so everyone had to talk very loudly...
Have a good day (even with those cables)Helen 21.

Oh that text messaging is too funny! My dad is hard of hearing, but he gets frustrated. Sometimes that isn't fun......

Yep, I noticed the name of the shop too - did you go inside?

Thanks for the giggle - I like "goose" cheese too!!!

I thought you worked in a school? I'm confused by all the cables and switches! Love the goose cheese and smacked mackerel pate too!!!

I did giggle at the poor Grandad story, I do hope Mr Mojo turns up soon or maybe you have your wedding head on!! My daughter is getting married in June and some days she has her wedding head on, were she cant seem to get round to anything , or maybe she has a secret stash of chocolate somewhere hmmmmmmmm, Hugs May x x x x No9

I'm glad you had some light hearted momments this week, they keep us going sometimes don't they, well, that and chocolate! Sending mojo your way and waving hi from the hills of North Carolina :)

That plugging part A into part B looks rather tedious. I hope it goes quickly for you. Judy #134

Taking it literally this week I see, Still a jobs a job, gotta have some money coming in to feed the craft habit!! lol
Hope your well
Minxy x

I want to know about the mackeral, we too have the boys repeat, we too are the family that provide, but (you know what I mean)- ain't it always the case that the non providers birth claimants get the happy holiday dates? (hope that doesn't sound as bitter as it reads), some of my facebook conversations with my eldest - they are just like your phone message - they have Annette Voodoo Vixen in stitches...and i tittered at yours, and lastly we both know it would have been your fault alone if the poor kid had been locked out....

Oh bless Miss B, I love her pavlov reaction!
Did you actually go into La De Da? Or just drive past it as it's on the ring roady bit of town?
Was sorry to miss out on Sat, but had a customer coming to pay a large bill, so worth it really!!

Ha love the text convo! Great pics. Thanks for sharing this WOYWW, It's Thursday and I'm still snooping through the list! Take care Zo xx 22

Thanks for giving us a laugh, poor Grandad though. Hopefully Mr Mojo will return soon. Thanks for sharing. Regards, Anne #66

What a good read it was today Morti, got me chuckling. Don't fancy all the mucking about with the leads though - rather be crafting.
The dies I used in the hotel were mainly memory Box ones, if there were any like doilies they would be the Cheery Lynn ones.
Thanks for visiting me, I am way behind this week and so much to do.
Toodle pip - Hugs, Neet

Between a deaf grandad and little miss B you must have a giggle a day. Hope you got all those bits joined up.

#141 I'm still making my way 'round last Wednesday's WOYWW ... I enjoyed your post and thank you for sharing the laughs!

Thank you for such an amusing post this week. you really gave me a giggle especially with the texting. Hope your fingers have recovered from putting all those tiny things together. xx Maggie #5

....LOL....poor Grandad B, Goose cheese...aw! Tee hee,,,,suppose it will come to us all eventually! The cables look like you could be creative with them maybe? dunno what, but summat....now I am rambling due to tiredness & a very busy week, hence the very late desk visit! Hope to get my act together soon :)
Lavinia
x
.ps....what does Goose cheese taste like?...have I got the wrong end of the stick?..:) I have havent I..?

Hope you've finished the cables and have found something more fun to do!
Children, eh? Mine are teenagers now, still have many mad conversations with them!
Thanks for visiting. Suzanne