It always happens doesn’t it? That chance remark. That subtle, last-minute reminder. I should have known what was coming the month or so before when we arranged a trip on Saturday and the comment came up of “oh, that’s Mum & Dad’s Wedding Anniversary weekend”. So I shouldn’t have been surprised when, on Saturday, after getting in and realising that we hadn’t picked up a gift, we needed to go back into town to get one and he says “can we rustle up a quick card? If I tell you what I’ve got in mind, can you do it?”
We had, literally, two hours before the shops closed, and I’m supposed to rustle up a quick card and get back into town to find a gift?
Naturally, we did it. In fact, the card from last Wednesday’s WOYWW was the inspiration, as it gave me a launching off point. Mr B pointed out the colours he wanted, I had a bit of a fiddle, and Robert was my mother’s brother. Voila. One card. 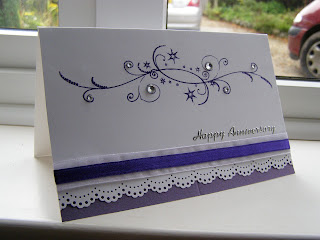 Stamp: Flourish by The Fourth Dimension, stamped twice to make a longer image.

Ink: Versamark
EP: Moonglow embossing powder in Venus Violet Blue
Punch: Martha Stewart, naturally.
Ribbons:  Lilac organza and purple satin
Additional bling and a peel-off
As a result of this card, I was then able to go on and finish the other one from last week. I’ll put that one in tomorrow’s WOYWW though.
And the original trip we had planned? Mr B had bought me a hot air balloon flight for my birthday earlier this year, and unfortunately this was the third time we’d tried to book it, and the third time it had been cancelled due to the weather (on this occasion, low visibility and high winds at altitude). We’re cashing in the ticket, as they’ve said we cannot book again now until the spring, and unless you take your flight before the anniversary of the purchase is up, you lose your money and your ticket. Mr B is going to put the money to something else for me. Hmmmm, now what shall I choose? More Copics? Some Nesties? Maybe a Cricut……. ?
Rambled madly by Morti at 2:10 pm

Lovely card, men have no idea of how long things take!

Such a beautiful card :)
Shame you haven't been able to take that balloon flight, there will be other occasions to do so though i'm sure.
Jo xx