Despite having said I must blog more often, here we are a whole week later.... LOL

It's my second week as guest designer over on Sketch Saturday and we had another fabulous sketch again. Keeping up with the medieval theme - here's a card that uses minimal stamping - the only stamps used were the alphabet to create the word "sempre". 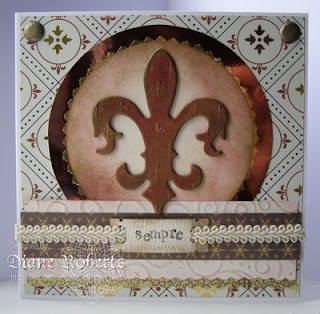 Papers used were by SEI - fabulous, yummy sheets of 12x12 from their Windsor collection which I picked up at the Craft Barn on Wednesday - and the fleur de lys is a Tattered Angel glimmer chip. Metallic cards in Mirri gold, mirri copper and matt gold. In the two top corners I've used the new Card Candy, by Craftwork Cards. I have to say, it's fabulous. I suddenly came to the conclusion at the end of making the card that it just needed a little extra, but by then it was too late to add big shiny brads. As I hadn't bought gold Card Candy, I used dark blue ones from the Army & Navy set, which I then added some gold metallic rub on to, and attached using foam pads. Perfect! Inks used were Distress Inks in Aged Mahogany and Frayed Burlap (as well as some encore gold just to lift the colours a bit) mainly used to colour the glimmer chip and to which I added more metallic rub on.

Oh, I lie. There's one other stamp used and that's a crackle background from LB Crafts.

I think that's it - if you have any questions please feel free to ask!

And one last point of geek-interest. I've used the Italian word "Sempre", which means always, rather than the Latin word "Semper". Why? One reason, and one only - I thought sempre looked better!
Rambled madly by Morti at 8:00 am

This is an absolute stunner! I have enjoyed your 2 weeks as a Guest at SS and I will be coming back to visit again. I enjoyed listening to Loreena singing the Highwayman! I have that CD and it has been ages since I listened to it! Hugs Jeanette from Sketch Saturday!

Oh wow Diane this is stunning, love the medieval theme ~ gorgoeus. Thanks for playing along with at SS as Guest DT, its been fabulous visiting you and will sure to be back again.
Have a great weekend.
Hugs
Tracie :)x

The medieval feel is great and I agree, an "re" ending looks more sophisticated than and "er" one!

Oh this is super nice, can see why you were given the guest DT place x