WOYWW 115 - the one with the plastic box

Well, I was full of the intention of waxing lyrical last night on the subject of my weekend, and the ravening hoards who descended upon my tent/campsite, but I couldn't have put it any more eloquently than the fabulous Mrs Dunnit.  Except perhaps maybe to mention the plum stone spitting contest (brief, but amazing) whereby I nearly choked with Julia telling me not to ... um... choke.... and to mention the glowstick-frisbee, with Master LLJ going arse over tit more than once.... No, Julia told it like it was and it was like she tells it!
I decided that a photo of LLJ and the Dunnitster from the back, spitting plum stones, would probably get me the biggest "unfriend" of the year if I posted it on here, so have elected not to do so.  Call me prudent if you like.  I am taking bribes though.  Preferably Nestie shaped ones.
I can show a manly photo of us being waited on though! 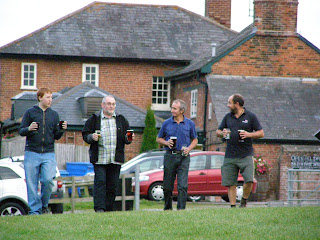 Or perhaps not.  No, instead, I'd better get back to the point of the post which is....drum roll please..... WOYWW 115!  Yup, it's that time of the week again when we get to blop about the world and snoop and loiter at other folks' desks.
Mine however, will just get me a load of swift bypasses. 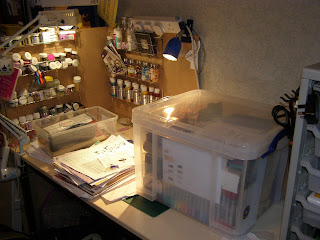 Yep, the great packup has begun.  The RUB (Really Useful Box TM ) on my desk is actually box number 4 - the other three all being cardboard, but then again the items on my desk deserve the best.  Copics, ya know?  Tools.  Stuff. Basically all my desk things.  I figured if it was a clear box, I would be able to identify it quickly, and it would stay separate to the other thousand labelled "craft".  LOL.
Stay tuned for another installment of "Dude, where's my craft room....?"
PS,  Sad news, we believe the baby alpaca died - there was more wrong with it than appeared at first - the wonky legs were down to a problem with its pelvis, and Mum refused to feed it.  Another baby has appeared now, and Mr B has been tasked with getting a photo today....
Rambled madly by Morti at 6:00 am

so have you found anything that you forgot you actually had, or did you know where everything was before the big pack?
good luck with the unpacking....
caroline #19

Enjoyed all the event accounts!
Love RUBs too1 I'd like to have about 100 and THEN I'll be tidy...promise...
Thanks for sharing your desk today. Sarah at 2.

interesting post this week. I would be careful offering up a bribe price to this group cause someone might want to see what you got! Sounds like you had a blast. Hope you get your craft room back soon. Vickie

Now there's a sensible way to pack! I mean, really, we NEED our craft things when we need them!
Happy WOYWW

I am sending nesties as we speak - you gotta show those plum stone spitting pics.... lol.
Looks like you all had a great time. And I love the desk too, which is after all the reason we are all here early on a Wednesday morning!

Bad photos of my bum are probably best kept off the old Interweb, the world is not ready for that kind of exposure!! Great pic of the boys - the theme tune to Reservoir Dogs immediately came to mind - lol. Fab night, lots of laughs. See you soon, bearing cake..... :) xx

Sounds like you had a great time. Don't envy you packing up your craft room! Best of luck.

Very funny post this week:) very sensible use of the RUB, I love them. Good luck with the rest of the packing xx

Wow, that's an even bigger bin thatn I have been shoving my Copics into! Good job with the packing.

Ah what she didn't tell y'all was that my spitting is so dainty that I lost. Oh yeah.
Great pic Morti - I didn't realise anyone had taken any in daylight!! Don't they look like an attentive nad helpful bunch!!
So if you've got the RUBs out...it's serious. Remember, we'll be round to erm, help at the drop of a jiffy.

Ha ha, Morti, love your post this week..and I too would like to see the stone spitting comp please?
...and trust all packing goes to plan and pray nothing of great import like craft goodies is lost in transit. I lost a container of Tupperware once moving and so lids and bottoms never found one another again so put them together - huh? Blessing on you and it all, Shaz in oz.x

I don't envy you packing up at all. I've done it last year and it never stops. I can't believe how much can fit an such a small space. :) Sorry to hear about the alpaca baby.

No matter how many boxes I have I'm still not neat! I'm forever looking for something! Story of my life. Have a great Wednesday!

Can't think of a better campsite than one in a field next to a pub!! Love the typical eclectic English games you amused yourselves with! Ooh, packing up the craft room, that's a scary thing to do! Sad for poor little Llama baby.

it's the knack of getting the big breath in to do the huge spit out that can be a bit tricky, commonly results in choking, so very important to have a person nearby that can do the five sharp back slaps...moving to fist under diaphragm/solar plexus if no joy with the slaps,

if you find my giraffe pencil whilst packing can you mail it to me? I'm sure it has gone traveling 'cos I cannot find it anywhere,

sorry to hear the alpaca didn't make it.

How much are you willing to take for those pictures? Bahahahaha! Great post, thanks! I must be getting old/hoprmonal or something but I was quite upset to learn of the wee one not making it! Weird how the mother knows somethings wrong though. Happy to hear a second has appeared but can't help feeling sad, I love animals! I guess things happen for a reason ((sigh)).

Love the pic of the drink servers! Wish I could have seen the stone spitting contest. Sorry to hear about the alpaca baby :( Good luck with the craft room pack out. See you next WOYWW! -Amanda

I'm having a quick trip round the WOYWWers before I start on my next batch of little African dresses. It's great to see what you're busy with this week.
Hugs,
A x

OK so when People say, "There's the rub of it" they are talking about lovely boxes of crafty stuff?!? I've missed soo many opportunities! Hope your packing goes well. #89

Great photo of the men with the drinks. Shame about the baby alpaca - it was so pretty. Hope your packing goes well and that the move will be trouble free. Enjoy your week. Elizabeth x #70

So sorry to hear about the alpaca. Sounds like you had a wonderful time and please post the pic what have you got to lose!!Good luck with the packing and tidying.

Bet you will need an extra box for all the bits you uncover along the way.
Love the story of the spitting contest and nice to see the guys waiting on you.
Thanks for sharing- Neet #19