Greetings and salutations my fellow WOYWWers!  Welcome to another round of WOYWW as hosted by the lovely Julia over at Stamping Ground.  If you don't know what it is, come on over and join in - I don't think it HAS to be a crafting desk, I've certainly posted my work one often enough, as well as my sofa!  LOL
So, this week, I've had a busy desk.  Here's the current shot: 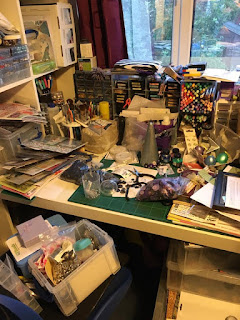 A busy mess of beads and buttons and pliers etc...
Close up:﻿ 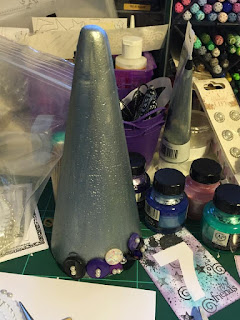 I'm actually making a button ornament.  The long standing WOYWWers amongst you will recognise that the buttons in question are the same colour as those in my wedding bouquet from Jun 2013 - and that's exactly what they are.  Well, not from the bouquet itself but extras.  I wanted to make something with the "leftovers" as it were and plan on covering this polystyrene cone with them.  It'll be a lovely way to display them and easy to dust - the bouquet itself is languishing in a box until such time as we have a glass display case to put it in, and somewhere to put said case!
I see that my WOYWW 7 ATCs have made it into the shot - I still have a couple of these left if folks are interested!
Earlier this week (Sunday in fact) saw me industriously beavering away with fabric.  ﻿ 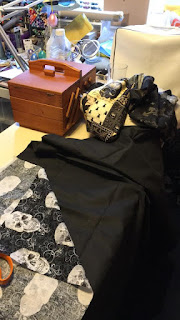 It wasn't actually that industrious.  I only managed to turn out two cushions, and I have another 4 to make yet, but these are the two I made that now reside on Lil Miss B's  bed.  Along with Batman and a wolf.  Humourously enough, the two red cushions at the back are actually the rear view of two Christmas cushions she has - but as her room is red and black, she still wanted them on her bed.  Guess I'd better find some red fabric too... 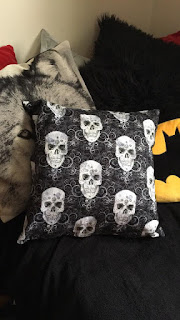 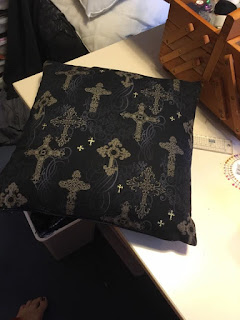 I also have to make two plain black cushions onto which both she and I can stitch all the patches we've been awarded in the past - for Girl Guides/Girls' Brigade and Geocaching!  LOL
I'll leave you with a gratuitous shot of last night's sky - I took this as we went out to walk the dog once it was a bit cooler.  So very pretty....﻿ Hope you all have a good day and I'll try to get around to as many as possible in my lunch!
Happy Hopping!﻿
Rambled madly by Morti at 9:03 am

Me again! Just seen your comment. Yes, your lovely card did arrive (I mentioned it to Miss B on FB) thank you so much, that was really kind of you. And it would be lovely to see you up sometime...are you coming to the crop on the 8thOct? I'll message you on FB....

hello!
Thank you so much for visiting my blog - that MB tree die is lovely, isn't it? I find I use it quite a lot as it suits various occasions and reasons.

It's ages since I joined in the WOYWW thing, but I've enjoyed seeing your fab photos this morning :)

Interesting project with the buttons! Do show us as it progresses! Loving the skull cushion and the patterns in the sky! Have a lovely week! zsuzsa #25

Love the cushions and love the idea of using the buttons. What a wonderful way to have another memory of your great day.
Hugs, Neet 10 xx

Fiona@Staring at the Sea said...

Great job on the cushions. I need to get some new pads for all the ones I made when the children were small. The Mechanic has used them too many times as pillows and they are all looking a bit flat these days!

I am very impressed with your creativity! the cushions are fabulous. Your button cone will be gorgeous, too and another lovely reminder of your wedding. Love that sky, too, it never ceases to amaze me at the beauty we see in the sky. Thanks for visiting - good job the floor (and consequently the ceiling of the maisonette downstairs) is made of concrete, is all I can say in reply!) Helen #1

Can't wait to see the finished button project! How neat! :) And you say "only turned out two cushions" like that was a small feet! You seem very busy to me!! LOL I love both the cushions by the way!!! Happy crafting the rest of your week! Felicia #43

Loving the cushions, somebody's going to be very pleased with those. Your desk looks good to me just the way I like a desk to be, nice and busy. Have a great woyww, Angela x 17

please post the finished cone. I am so wanting your skull pillow! What a cool cloud formation.
Hugs,
Chris P #30

Hello Morti. Oh my those pillows are great and I love the fabric....more so one of my daughters love skulls. Great idea on the use of the buttons to display. Seeing so many people sewing makes me want to pull out my sewing machine. Thanks for visiting me earlier and have a wonderful week. Hugs ~Anne L#5

Fab desk and gr8 cushions, thanks for the earlier visit

Great cushions - the skull fabric is amazing, my nephews would love that! The button tree is a fantastic idea and it's a lovely way to show the buttons off, I'm looking forward to seeing it finished.
Thanks for the visit to mine, I hope you have a lovely week,
Diana #21

Hi Morti, Looking forward to seeing your button ornament when it's finished.

Those cushions are fab.

Thanks for stopping by my blog.

You have been busy this week! Love the idea of using the left over buttons in a decorative way. Love the cushions you have made. Lil Miss B isn't the only one with Christmas cushions on her bed…my spare bed does too. I think I am going to make some cushion covers I can take off and on and not have to change pillows out each season! Hope you have a great week and thanks for visiting my blog. Vickie #6

Love the cushions and the new 'zip' skill.
Thanks for visiting my desk already
Kyla #18

Gosh busy busy and so glad someone understands the geocaching trackable thing!! I just ignored those who thought losing them was funny as it certainly is NOT!Yes I'm Gregorian, who are you?

I'm way behind this week, stuff started up and I got totally exhausted by Wednesday night!

Thanks for visiting me BJ#15

Lovely cushions! I never know what one does with all sorts of cushions on the bed and couch. They tend to be in the way, but I know other folks pile them high all over. I enjoyed your desk view today, by the nice sunny window. Lots of nice stuff out for you to play with. Thanks for the visit! PJ #36

Thanks for your visit. I love the cushions you made! The cone decor item will be lovely. I covered a wooden ampersand with buttons and painted it to match my den walls -- time-consuming, but worth it. Belated happy WOYWW from Laura #34

Hi Morti! Thanks for visiting me this week. I'm late too as hubby is still home for a few more hours. Love the fabric. My hubby would especially like the skull print. Thanks for the idea of putting the badges on cushions. I have tons of them from my days as a leader. I'll try to remember to post a pic tomorrow of my Girl Scout shelf I've added to my office.

I'd love to swap WOYWW 7 ATC if you have one to spare. Please leave your addy in my contact form on my blog and we'll connect.

I have a glass display case but it's full of all my treasured glassware. What I do, is bring out our big wedding picture, the hurricane lamp my maid of honor carried and my bouquet as part of a fall display every year for our anniversary. That way I still get to look at them for the month of August. Love the button tree. My bestie from high school used to make the button bouquets. So pretty.

Lots going on here! thanks for having me.
Here iOS the link to last weeks WOYWW- don't know why the link didn't work!
http://rainbowweaves.blogspot.com/2016/08/woyww-august-31-birthday-painting-and.html