I'd love to be able to say what a surprise it is, how fast the year has flown, but that's not strictly true.  We've spent the last year commenting on how speedily the weeks have passed, so it'd be nothing new to say here.﻿  It would, however, be correct of me to say that Christmas shot by faster that expected, especially as I completely missed out on last week's WOYWW.  (If that series of letters leaves you feeling decidedly ? shaped, go to Julia's Stamping Ground to find out what the Desk Diva Extraordinaire is up to.
Christmas for me this year did pass by in a blur.  I would like to thank my Operations Director Sean (not my personal Ops Director cos that would be me, stoopid, I mean that of the company I work for) for coming into work the week before Crimble with man-flu and duly handing it out to the staff like the florid-faced Santa he was.  Bah humbug.  Yep, I was one of the ones that got it, and as I write this on Monday night, I'm only really just over it enough to comtemplate work tomorrow.  Oh, how I wish to put a hex on he.
Yes, I'm doing this on Monday night cos we're still in the throes of panto and I won't have time tomorrow to set this up for Wednesday a.m.  Live with it.
So, to sum Christmas up in one picture and one word.... 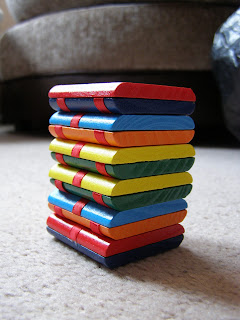 Random.﻿
That was what Lil' Miss B said.  "Sometimes, Santa can be really RANDOM". We're blessed in that she still believes in Mr Claus, despite having reached double figures.  It could be that she's playing along this year, but I'm guessing next year she'll be a normal secondary school kid.  However, it meant that this year we could still have the fun of the old mince pie, milk and carrot routine, and insist she went to bed early etc.  She still did her Santa list, and he was kind enough to oblige with most of the items on it (she's not a greedy kid, luckily!) and a few she hadn't asked for, like the above Jacob's Ladder toy.
Well darn me if that hasn't been the item most played with.....
Oh what, yes.... I'm digressing!  The real reason you're here is WOYWW, isn't it?
So, what did Santa bring you, little girl?  Aside from the whopping great credit card bill, that is?  Um.  Not that much actually!  I can't really recall what I got on the main day, for the reason that it passed in a paracetamol-and-codeine-induced haze.  I recall chocolate.  I recall a scarf.  I definitely recall jewellery.  I also recall, as they're in the pic below, that I got a jeweller's vice (aka helping hands) and a pair of crimp bead pliers.  Oh, and a nice Avenged Sevenfold CD.  And a couple of Jethro Tull ones too.  We'll pretend, though, that I haven't mentioned both those bands in the same paragraph. 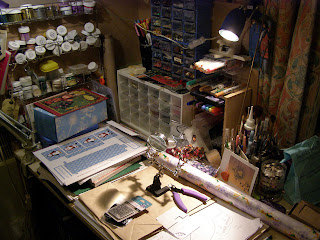 Happy New Year!
Rambled madly by Morti at 6:00 am

Thanks for the peek and sharing.

How rotten to get all those germs at Christmas. Glad you've recalled some of your gifts though and yes, so lovely when kids do still believe - mine are teenagers but I refuse to give in and say there is no Santa! :-)

If only Christmas didn't come in the middle of winter with all those germs, rofl!! Hope you have a great 2011.

Snap we had a familiy of sickies over the festive period just like so many peeps suffering from that flu virus of some sort.Hope your feeling better soon and able to get creating .Have fab wednesday hugs judex6

Hi Morti hope you are feeling much better now. Glad Christmas was fun for your all apart from your bugs.. it's a shame when the magic ends for litle one.. Hope you have a great year. Gez.xx

Unlucky to be ill for CHristmas..hope you are OK now.
Sue xx 50

So unlucky to be ill for Christmas...hope you are now OK! Difficult to keep that dream alive, you have done well to keep it going for so long. May be she is pretending!
Sue xx 50

Happy New Year! sorry to hear you were poorly over Christmas I had a bad cold that week too :( - still lovely busy desk there and some new toys to play with - enjoy! No. 28.

Yours passed in a blur, mine passed like it was just another weekend lol
Hope your not suffering too bad with the flu hun, xx Happy New Year to you
Minxy #25

Sorry to hear that you were poorly at Christmas; sometimes you really want to tell the stoic at work to just go home before they fell the entire office.

What are you saying, "there's no Santa Claus". Sorry to hear you have been sick, bummer. I haven't played with a Jacob's Ladder for years, had even forgotten about it. Thanks for the memory. Would like to run my fingers through your stash. #95

Don't you just love the guys who bring the man flu? You would think they would be more considerate. Random. I LOVE it. Good for your daughter. And I can't wait to see some jewelry coming from that desk. Happy WOYWW from # 16.

next year I'm asking Santa for my marbles back,

oh and my 19& 17 year olds still leave out mince pies and carrots ( and not just on Christmas eve, and sometimes it is cereal and it is in the bedrooms rather than the hall way... hmmm)

anyhow it is a trait

for which Bob ( the dog) is suitably, in reindeer santa type way, grateful.

Looks like you also got some brown paper bags and a huge roll of Disney wrapping paper too! Now that's truly random!! Hope you're feeling better soon.

Hope you get to enjoy all those lovely gifts on your desk.
Sandra#66

In our family, if you are to old to believe in Santa and write a letter, you are too old to recieve gifts> That means that my 30yo daughter still faithfully brings the letter to be posted to Santa.
Enjoy all your pressies.

Happy new year to you. You have been a busy girl!
I had a glitch in my comment posting, all sorted now. Catching up with all my friends old and new, here in 'blogland'

I'm so sorry you've been poorly over the hols..that florid faced Santa should be ashamed of himself. How's the Panto been? My 17 year old DD advised her younger cousin 'if you don't believe, you won't get the stocking - so do you believe, or not?' Logic I guess is the kindest word!
You're another that has an instrument on your desk that could frankly, be surgical!

Hi there, thanks for popping onto my blog - and I'm going to go and have a proper nosey round your blog now cos it looks really interesting
Debz
xx

Cool Jacob's ladder toy! "the man cold"..too funny, but sorry you got it!

your desk looks so pretty in that picture. and of all your gifts, the jeweller's vice sounds quite interesting to me. maybe i should look it up and see if i NEED it!

You'll have you let me know how you get on with those crimp bead pliers - I have them but never quite sussed out using them!

Glad you're finally feeling better, it sucks being poorly, especially over Christmas.