Welcome to WOYWW!  For those that are aliens from Zog (or indeed, people who have just dropped in on a random bloghop), for more info on WOYWW, go and visit our chaperone and general desk jockey Julia here for more info!
So what IS on my work desk this Wednesday?  Well, I thought I'd be a bit different this week.  Panto is drawing ever closer - three rehearsals left (tonight, tomorrow and Friday) and then the shows begin.  Some of you (including Karen) have asked what I'm doing in the panto personally.  I mean, you already know Mr B is Captain Hook!  Well, I'm in the chorus as a random pirate for a start.  I'm also the sword fight choreographer (but they've epically failed to put that into the programme - I am so not chuffed about that) and scenery painter, and occasional prop hag.  I'm also a proud "Mum", as Lil Miss B is playing one of the Lost Boys, and a very proud partner to Mr B.  And also I'm sometimes the chauffeur, though Mr B does most of that.  Being so involved with the creation side of the panto, at present, this is my workdesk! 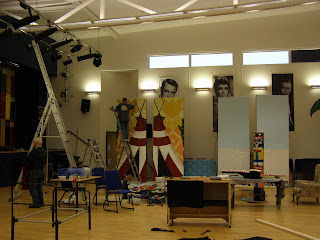 To explain...
We hire some AMAZING (and some not, but that's another tale) backdrops from a fab company in Wales.  They have hundreds of different ones, but the snag is that you can't have them until the week before your show.  You can have a pic of what you're getting, to get an idea of what you need to do to the rest of your scenery to make it blend in, but as for colour matching, that has to wait until you have the backcloth under stage lighting in front of you to get the colours just right.  We have a set designer, but it's kinda my job to do a lot of the painting and direct others with what I'd like them to achieve.  I made the mistake last year, when I joined the group, of joining in with the painting and now they think I can paint.  I'd not painted a single piece of scenery before then.  In fact, my art teacher used to have to beg and cajole me to even pick up a paintbrush; I used to only work on A4 sheets with pencils!  Ulp!  I don't consider myself to be an artist - creative yes, artist, no.  I just happen to know how to make things look three-dimensional. 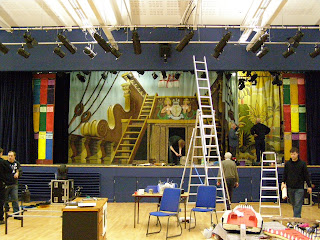 Thus, the entire theatre is my workdesk at the moment, and I even have little men running about in it doing my bidding.  Hmmm, maybe I should rephrase that.  Mr B might see this and he's up that ladder there....!! 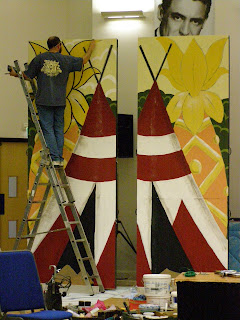 Amongst this year's scenery we have a reservation scene, a beach scene, a flying scene (thankfully that's just a backdrop and some dry ice, no painting!), the nursery, and the pirate ship.  The ship backcloth is fantastic - I am SO in awe of who paints these! - but it's causing a major headache with the flats as we have to match the ship sides in.... scary stuff.  the palm trees were fun though, especially as people didn't "get " them when the trunks were bare.... 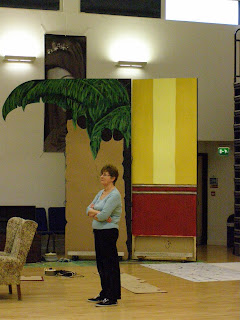 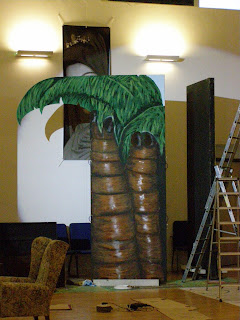 At home, my real workdesk has even more panto on it.  Two tankards that started out as clear plastic and Mr B's hook.  It's been a bit fun trying to work out how to make it - we wanted it to be as realistic as possible, as most of the costume hooks you can buy still allow free movement of the wrist (something you are rather lacking when your hand has been eaten by a crocodile....LOL), so we've made up an arrangement that (just) fits under his costume, restricts his movement, and yet doesn't look quite so plastic.  We have to glue the hook to the armpiece, and I can assure you that it looks WAY better when he's wearing his costume.  Made from one costume hook, one boiled potato can, one coke bottle, and Ten Seconds Studio metal.  Eagle eyed folk might just be able to work out that I've used Big Daddy Mould #4.  LOL. (Picture was taken last night)
﻿ 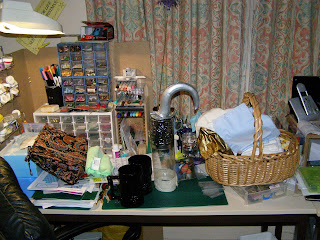 This  morning I finished off the tankards with a dry brush coat of silver to get the appearance of being pewter rather than plastic.  Fetching doncha think? 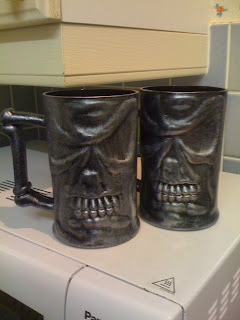 Ok, I gotta run..... Thanks to all of you who commented last week, will be commenting this week, and to whom I may not have enough time to visit.....  Catch you around on The Hop!
Oooh - and a big hello to Noreen who has just found my blog doing a search on the Panto, cos her daughter is involved with it!!!!  ROFL- welcome to WOYWW Noreen!
Rambled madly by Morti at 6:52 am

The set pieces look great. I loved performing in pantos. Wish I had men doing my bidding.....

oh WOW! i admire you and just love the use of the TSS mould on the hook! you need to show TSS this!! :))
Have a brill panto
Happy Woywwing
Jennie #2

I think Panto has taken over your life!! Love those tankards and all the painting which is great. You have nothing to be worried about.

Wow, interesting post. Give my regards to Cary! Happy WOYWW!

wow, it all looks amazing and those tankards are fantastic
Debbi #39

Clare with paint in her hair said...

The sets are looking good, the palm trees definitely look like palm trees!

What a huge workspace you have this week. It must be so hard to think in such a huge size, but it all looks wonderful. Love the way you have thought through and created the mugs.

Cool sneaky peek into the world of panto.. he's behind you.. {sorry!}
Love the tankards, very pirate friendly :D
oh no it isn't, oh yes it is {sorry again} lol
Thanks for visiting me
Happy WOYWW
Minxy #1

Blimy!They would be doomed without you! Your amazing, looks like your keeping them all rolling in the panto! Well done you! I love the Tankards you have done, good job they look brill! I have mates that do panto every year & knoiw what hard work it is to bring it all together! The Backdrops for the stage look really good! Brake a leg!
Lavinia
x

"Panto" is a new word for me but I loved all aspects of theatre productions in my former life.
Your trees are more than alright. They are beyond fantastic!
I have to hang around and read more. No hurry to visit me, as I am on a break.
I am blown away by your creativity on the small details.

yes that's all jolly interesting but have you seen what you have started on my desk?

sets look fabulous. I wish I had little men running around doing my bidding. I can't even get my 8 y.o. to do my bidding.

This is definitely the most impressive WOYWW post of the week, you've got a whole theatre as your workdesk and by the look of it making a brilliant job too. Fingers crossed for opening night.

Wow, the tankards are amazing..and exactly when do you guys have time to work and eat then?? Looks like great fun. I can actually see the concern over the palm trees sans foliage..!

Sets are fab, Tankards are dam cute and your doing an amazing job of the whole lot. Good luck for the production.
Mrs A. #92

Looks like hard work, and so worth it! Wonderful pics.

Thanks for the peek and sharing. Happy WOYWW, hugs Marjo #10

Awesome job on the tankards and thanks for the info on the jeweller's vice - very cool! Your attention to detail is amazing!

thanks for dropping by my desk. At this stage all I have found is the rising waters flood appeal blog and they are focusing on crafters making cards and layouts that will then be given to families. All the best with the panto.
Sandra

That looks amazing. It all sounds very exciting. TFS
Tertia 110

Thanks for the peek! :D

What a fantastic life you lead. Where do you get the energy!
Good luck with the panto!!
Sue xx 67

Wow all this AND you choreograph sword fights?! Thats something I'd love to do, learn to stage fight! (altho in truth I just wanna learn how to wield a lightsaber!)

What an ace post! Hope it's all been going well :)