It's taken me a while to get here though, hasn't it?

I've been rather busy of late, and I keep meaning to come back on here and post what I've been doing, even if I only post one thing a day. Amazing how real life gets in the way - I've just seen that my last post was on the 27th January, but it doesn't feel like it's been more than a week since I last blogged!

Anyway, onto the more interesting stuff.

From the Morti Creation Station this week we have.....

Well, the first one isn't my own work - remember the metal ATCs I posted about on the 25th, for an ATC Swap at UKSTampers? These are what I got in return! 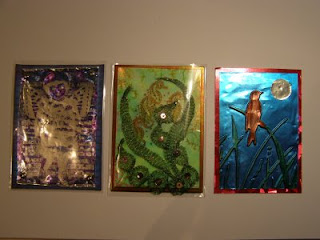 Big thanks go to WyvernSian, Rukshana and Okey for their fabulous work!

Next up is a 3D decoupage card I did for my little friend Miranda who turned 7 on Saturday just gone. My apologies for the poor photo - the full sized image of the whole card turned out blurred when I downloaded it from the camera, but by then the card was on its way...

Anyway, it's quite a simple card, using the die cut Fairy Poppets 3D images, mounted onto one of the DCWV (I think) mat stacks (Once Upon A Time set), which was then mounted onto lavender pearlescent card. That in turn is on an A5 pale pink card, and there's organza ribbon and bling. LOL 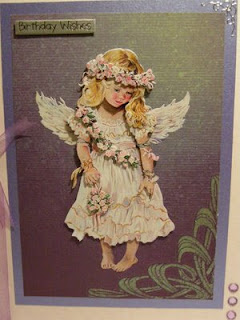 Finally for this post (cos it's a work day, and I've got to run!) is a card I made for a birthday on the Birthday List at Aunty's.

Again it's 3D decoupage (relatively quick and easy and doesn't require a lot of extras to create the wow factor!). 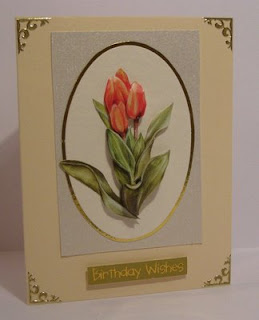 Just realised something - my apologies for my exuberant use of parenthetical statements - just one of those days!!!
Rambled madly by Morti at 7:53 am

Oooh, your ATC swaps look fab - love that knitted wire stuff used as seaweed on the middle one! Nice cards too, the fairy one couldn't fail to be a hit with a little girl and the dimension on the tulips looks great!

Love your cards, especially the little fairy, and the swaps look fab! Still waiting for RM to deliver mine!

Beautiful cards - I can't make cards at all - so really admire anyone who can.

beautiful cards chickie ~ love that fairy one! and beautiful atcs! congrats on the 100th post..whohoo!