Last month we did an altered domino swap on UK STampers . I've only just got into using Alcohol Inks (Tim Holtz IS a god...) so I thought I'd join in. What I have learned is that it's a good idea to remember that different coloured backgrounds affect the end result - I used the same inks on both the canvas and the dominos, but as one was white and the other cream, I got an odd effect. I also found out that alcohol inks strip the gold colour off German Scrap. It was just as effective a technique as adding the ink, to create a distressed look, but hey-ho.... I should point out that the frame is only about 4" x 2" approximately - weeny. 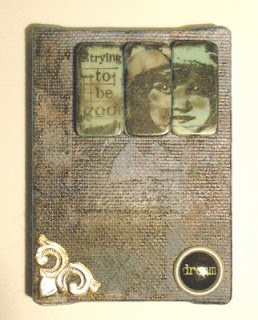 Images used were by Paperartsy and Judikins...


I've also realised that I completely failed to put up here the results of another ATC swap on Aunty’s Forum. The January swap was "Thank You for the Music" and my offering was very similar to the Metal one I did for UKSTampers: 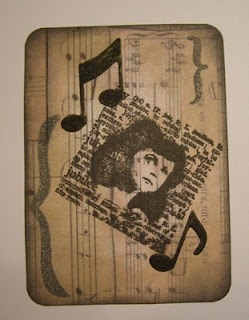 And the ones I got back in exchange were.... 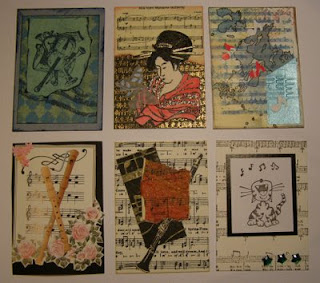 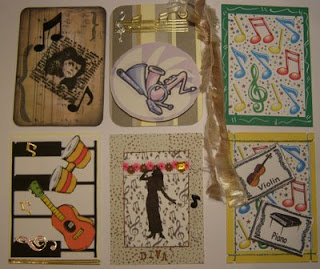 Can you spot the deliberate mistake in one of the photos??? ROFL
Rambled madly by Morti at 5:49 pm

Fantastic canvas Diane, and love all those ATCs x

That canvas is great - the dominoes must have been tiny! Lovely set of ATCs too (and we can forgive the deliberate photography error, our heads are mobile after all ;o)

I was the lucky recipient of that fab mini canvas. The colours in real life are better by far than the pic ! Thanks Diane.

oh..i'm SO lovin the domino canvas! so scrumptious, as is the images. and yummy atcs chickie!