I'm not even going to say it.

So let's skip the self-flagellation and say...

There's probably not a lot of point in trying to do a catch up post.  There's a massive amount that has happened in the last two and a half years. In a nutshell...

Finished my CIPD and qualified in Level 5 Human Resource Management - can now put "Assoc. CIPD" after my name....

Had an amazing road trip to Italy and Gubbio - stopping off to see the marvellous Donna Garner en route.  Might blog about that in due course.

Joined a new Panto society and appeared on stage...

I'll probably cover some of this off in future posts.


So what next?  I will, honest injun, do my best to post more often now.  My life is getting back into some semblance of order.  Honestly, after moving it took months for us to locate the pizza cutter, and the coffee percolator, whilst discovered, is still sitting mournfully in its box because we're not sure it needs to be out permanently these days.  There's still loads of boxes to unpack and the house is basically a money pit that needs a lot of time and energy spent on it.

Craft-wise, not an awful lot has been going on.  Actually, I lie.  I'm working on a crocheted pullover for Lil Miss B.  I finally finished my counted thread piece, Cape Breton Christmas, am working on a Blackwork SAL by Peppermint Purple and have dug out an old WIP to finish. 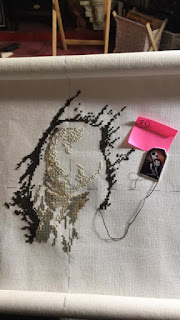 I've recently finished a set of wedding stationery for a friend who is getting married in November.  Not made any other cards lately (except one, for my new great-nephew's 1st birthday), but my fingers are starting to itch and so the card making bonanza might start up again.  So might the old jewellery biz.

So, stick around.  I've missed spilling my thoughts out and think it's time I started again.


(and for any random blog hopper, WOYWW, or What's On Your Workdesk Wednesday is hosted by the lovely Julia here)

Hi there Morti! So good to see you. What a time you have had. So much has been going on for you. How's Cornwall? I love it down that way. Was there last summer. Congratulations on all the achievements - letters after your name, finished projects... the list is endless. Well done.
Take care. Stay safe. God bless.
Margaret #4

Well, it is lovely to see you back in the fold so to speak. And you have done so much in the time away - a virtual whirlwind of happenings. Hope you are having a wonderful time in Cornwall, what a beautiful part of the country.
Must get to see some of your paperwork soon - please. I guess the wedding stuff will have to wait until November?
Hugs, Neet xx 5

Enjoyed reading your thoughts!
We moved from the UK to Australia in February - and into our new home at the end of May...lockdown happened so our intended short stay with out daughter became much longer!
The shipping arrived and we realised how much more stuff we needed...just about settled now!
Happy woyww!
Susan #12

well it is SO good to see you back here with the deskers! you have certainly had your hands full so it's not surprising you've not had time for crafting till now! Happy WOYWW Helen #1

Welcome back and it looks like you have been super busy in the interim. Well done to dig out a UFO to complete. Have fun creating.
Sandra de @10

So lovely to see you again!!! That's a lot of changes you've been through. Did you move far? After seeing all the UFOs being completed I was inspired to finish a few things but I've been debating about a 25 year old cross stitch that might be beyond repair after going wrong too many times. So I started another one instead! Have a lovely week, Lisa-Jane #15

Welcome back, life does tend to get in the way at times and it sure reads that you have had big changes in yours over the past months but it's good to see you today. Your blackwork will keep you busy and focused for sure, I love those monochrome designs. I've so many things to finish those wips can get in the way of starting anything new. Have fun & stay creative Tracey #8

Nice to see you back sounds like you've been busy. Happy belated woyww, Angela x20x

Good to see you back Morti! You have had an exceptionally busy 2 and a half years. Congratulations on the qualification and the house move. Hope you eventually get straight! Stay safe and happy belated WOYWW. Sarah #2

Welcome back!! I am knackered just reading everything you have been up to, love the FB updates but missed you finished your CIPD, congratulations as I know how much additional work that is.

Welcome back, Morti! Lovely to see you on here again. Congratulations on everything you've achieved since we last saw you, and I hope you are now happily settled in Cornwall. We are in Devon and love it. Your embroidery WIP is looking great.