Happy WOYWW fest everyone!  Another Wednesday has rolled around and here we are,.  Yup.  Three weeks on the trot for me.  I'm trying really hard to make sure I do the things I enjoy doing, and this is one of them.  I didn't quite manage to get round everyone last week (in fact, I think I only managed about four of you!) but I'll try harder this week.  Panto gets in the way...
If you've not been here before and are wondering what on earth WOYWW is, I'll let the Amazing Mrs D explain it all to you here as she'll do a much better job of it than I.
I'm trying to avoid Christmas a little bit.  That's not to say I'm ignoring it, oh no.  I feel that self-righteous smugness that comes from being a tad organised and knowing that all bar three Christmas cards have been posted (and those others will be written and done tonight), and the resigned feeling of not having a brass cent in my bank account so what's not been bought yet won't be until Christmas Eve.  We have even scheduled in a present wrapping session for Sunday (while Lil Miss B is at work in the tea rooms), so that we're not up until 1am on Xmas Eve frantically trying to wrap gifts.  I want to enjoy this Christmas as much as possible... bearing in mind we have all the parents with us.  Whose bright idea was that??!!!
Anyway, I digress.
Onto the desk.
Not much has happened.  It's all been shuffled around a bit. 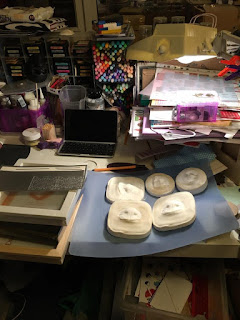 I'm no further along with the noses.  I think that may be because I know I have to do some sanding, and it'll make a mess.
I did finish sanding and firing the silver charms though.  Well, two of them.  The other two I wasn't happy about before I started sanding, so they're in the rehydration pot to be reworked.﻿ 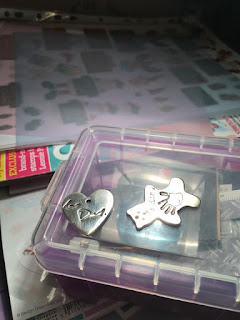 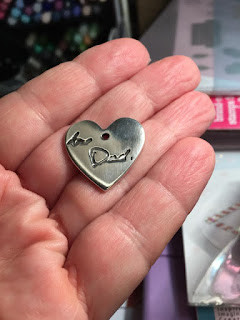 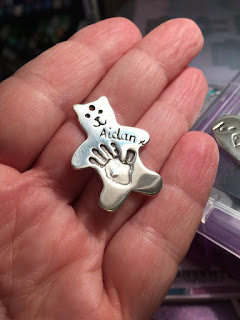 I can see there's a few scratches on them so might need to go back to the polishing stage and rework a bit, but as the "love, Dad" one is for me, I'm not too worried!  Don't they look nice and shiny!?
So, there you have it.  I did want to take a pic this morning of the newly decorated ornaments in the lounge - seems they've gone out and bought themselves some Santa hats, but it was too dark to get a decent photo this morning!
Hope you have a lovely day/week and I'll see you in a comment box somewhere near you shortly!!!  ﻿
Rambled madly by Morti at 8:53 am

Hi Morti good to see you again, and totally impressed with your silver pieces, worthy of smugness indeed!
Thanks for sharing,
Shaz in Oz.x #7

Love your silverwork and the fact that you are so chilled out regarding Christmas. Enjoy and stay chilled.
Hugs, Neet 6 xx

I've spent a late Christmas Eve with my sister in law wrapping presents before now, only for them to be ripped open what seemed like minutes later...so I hope you get time to do it beforehand! Your schedule sounds a bit full on, to say the least. I still have some shopping and wrapping to do too, but everything that needed it, has been posted. #1 Helen

Wonderful charms! I'm not quite as organised as you but I will not be up Christmas Eve wrapping.

Your charms are delightful and very shiny - I'll take your word for it that there are scratches on them!
Well done you for getting so organised - I was feeling smug yesterday with all cards sent and all presents bought and wrapped, then today I received three cards from people I'd forgotten about and two gifts from friends I never usually exchange with - it's quite stressful when people go off-script like that!!
Hope you have a great week,
Diana #20

Urg, gift wrapping....always takes way longer than I allow for it. It's a real job! I can't see any scratches on the silver pieces,but I'm not the judge, really nice pieces.

Those silver charms are beautiful, and I'm sure you are the only one who can see those "scratches" I certainly didn't! Smart to get all the wrapping done before Christmas Eve! My Christmas Eve is spent filling stockings, and these next few days I have to go out and look for things to put in the stockings! We are all grown up here, but still love our stockings first thing Christmas morning! Thanks for sharing! Lindart #35

Lovely jewelry. I work better under pressure, too. :-)
April #29

Hi Morti, the silver charms have turned out beautifully. Can't wait to see what happens with the Noses. I am intrigued. Don't stress about getting around to say hi woyww seem to be pretty relaxed. Have a lovely week.
sandra de @15

Morti, can't wait to see what becomes of the noses! LOL Sanding is a messy business for sure! I love your charms! I think you've done a fabulous job! What a wonderful talent! Happy rest of the week and Merry Christmas! Felicia, #38