Scrappymo! asked me on Wednesday if the drumming out of school thing (see this post) is the norm where we live.  We-ell, it sort of is, and it sort of isn't.... let me explain: 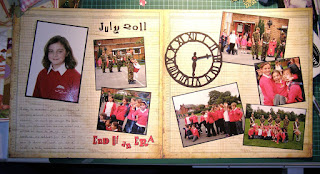 At the time, we were living near a town called Warminster (clue is in the name!) and Lil Miss B went to one of several primary schools there.  For non-locals, Warminster is on the edge of Salisbury Plain (where all our military come to practice their war play) and is home to the 3rd Battalion of The Yorkshire Regiment.  Their barracks is there, and many of the army children go to primary schools in Warminster.  I think there's 5 or 6 primary schools which feed into a big 1000 strong secondary academy. 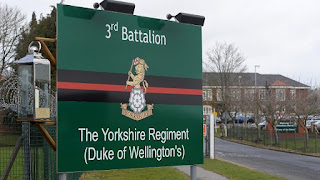 So, on the last day of term, the regiment split up and send several soldiers out to each of the schools and drum them out.  It's a lovely custom, and not only pays homage to the children themselves, but the links the schools have with the families and the soldiers themselves.  3rd Yorks in particular have suffered heavy losses in Afghanistan and Iraq, and the schools have to deal with the fall out on the children of the soldiers who have died...
We've now moved to the other side of the Plain, and it doesn't seem to happen over here, even though there are lots more barracks!  Hopefully, one or two of other Wiltshire WOYWWers will be able to confirm or deny if this happens in Larkhill, Tidworth or Bulford, or if it really is unique to Warminster.
Rambled madly by Morti at 2:01 pm

I must admit, I haven't heard of it anywhere else. It's a really great tradition to have started and will leave a life long memory with those lucky children :)
LLJ xx