Helloo again!  Here's my third piece, entered within the last hour of the Third Coast Rubber challenge.  This week's challenge is TCCC#3 Altered Dominoes.  It's been a challenge in more ways than one this week - first up, the ink moved (rather than ran, just in one place), then the glossy accents remained a bit foggy, maybe that adds to the piece, the silver and clear beads added just look like air bubbles, so a waste of time just adding one or two, and then the glossy accents gained a scratch.  Grrr.  Oh, and the proper ribbon clasps I bought on Saturday have gone AWOL in the craft room - I swear we have a poltergeist!

Anyway, the piece is now done, and looks like this: 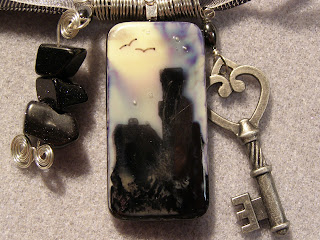 The stamp used is Third Coast's Hillside Castle Silhouette, the order code is FA-325-E and can be found here.

The black sparkly rocks on the left are called Goldstone - it usually comes in a carnelian colour but is available in other shades.  It's man made, but beautiful.... 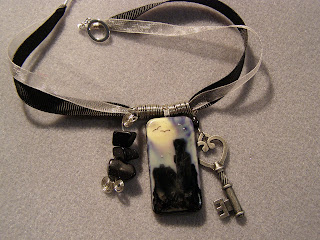 As for a story behind the piece, well, I will leave it up to your imaginations.....

I would say join in, but the challenge is just about closed....  instead, hop on over to Third Coast, and see what the next challenge is.

Me, I'm waiting for an order to arrive, so I can hopefully join in some more!
Rambled madly by Morti at 12:06 pm

It has a kind of haunting look to it that I really like. Thanks for joining the Third Coast Challenge.

Very interesting piece, congrats on catching the eye of the Coterie and for your winning Dragon Eye entry too!!!!
Thanks for playing with us in a Third Coast Creative Challenge!