That's it.
Panto is over for another year.  Oh alright then, 8 months, until rehearsals start up again!
Anyway, you've had enough of me blathering on about it for the last 4 months or so, so it's back to the creation station, and another round of WOYWW thanks to the delightful Mrs Dunnit.
So, just a quickie from me this week. Yeh, likely story I hear you say.... as I don't have an awful lot of time.  And I'm doing this before bed on Tuesday night because I probably won't have time tomorrow.
On my desk this week is.....
Ta dah! 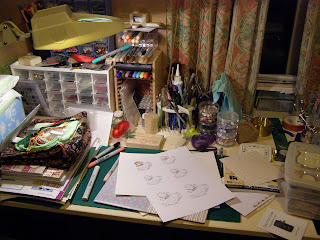 Not a lot.﻿  Unless you count the various backing papers and some Mo Manning digital images I bought tonight and printed off.  I printed several, cos you just know you're gonna cock up somewhere aong the line.  Anyways, I'm making a very belated new baby card.  So belated that the bambino in question is now almost a whole month old.  Still, it's good to start getting back into the swing of things.
I've also finally started to apply myself to my Photoshop Elements software, in the hope that I might master it enough to create digital scrapbook pages the likes of Cathy Zielske would be happy with.  I can dream can't I?
I can't remember who on my travels last week had a nice shiny new craft space and was trying to work out how to store her scissors etc, but here's a pic of what I do.  Admitted, the cable ties add a certain je ne sais quoi to the whole affair, but they're temporary cos we can't drill holes in our little rented walls.... I think the hooks were utensil hooks or similar - they're too closely spaced for cup hooks (in fact, we had to cut every other hook off in order to hang the scissors) but they do the job just fine.  as long as I don't buy any more scissors. 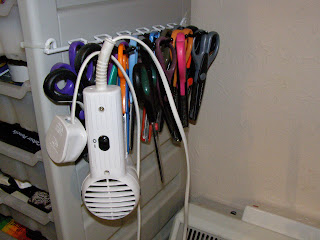 ﻿
Well, that's me done.  Told you it was short and sweet this week. Catch you around on the blog hop!
Rambled madly by Morti at 12:39 am

OH, I almost remembered who had the storage question, but my brain froze as I thought of it. I know. It's late here, and I'll use that as my excuse. Loved the short post (tee hee) and I never tire of reading about Panto. It was all so new and foreign to me. (I'm #8)

thanks for the snoop
hugs
judie 58

Hiya, thanks for visiting me. The fairy and horse stamp on my desk is called "Gwendoline" and it's by Kraftin Kimmie :).

Nice to have you back Morti, love Mo's images, so sweet!

Hi Morti, fab storage for your scissors, great busy desk. Thanks for visiting my blog. xx

Sissors? I love sissors. Great storage idea for them too.
Hugs Mrs A. #82

WOW lots of fun stuff in your craft room. Thanks for sharing your scissors storage!
Vickie

Great marker storage idea. I'm building the collection of Copics slowly and am always on the look out for storage ideas.

When you said a belated baby card it reminded me of a comedians rant about new baby cards, as apposed to an old baby "yeah he's 12." he he

You remind me to get stuck into Photoshop too - thanks. Good scissor storage.
Ros @86

Except if mymemory serves, you don't get 8 months off - aren't you the writer?? Anyway, congrats - it's a long haul in the end, huh! Like the scissor hanging - ingenious - and why could you possibly want any more?!

Ditto, fantastic scissor storage. I love how handy that is.

Thanks for the peek and sharing. Hugs, Marjo lucky #1.

Clever scissor storage idea - like you can't remember who was looking for ideas :( Your desk has got all sorts of interesting stuff to snoop around so thanks for the peek. Elizabeth x #96

Clever storage of the scissors. And I like your little cubbies
Star 125

Great to see your desk.. sorry I am calling late..but the bonus is I got to see your finished card.. tis gorgeous. :) Wishing you a lovely weekend.xx

How many pairs of scissors can a girl use??!!

I like how you've stored your card candy in those little pots; have you seen the new ones with dots on? ace