Well, I promised photos of the cards I made for our Peter Pan cast, and here they are. My apologies for the poor photography – I took the pictures for these on Mr B’s camera as my own was at the theatre in the dressing room. Tsk, stoopid me.
There’s also two cards missing. You know how it is. You run of four very basic and simple cards in a hurry because you’ve forgotten to do them the day before you need them, and then after you’ve finished and taken all the pics, you remember there’s two more to do. Fast. As you’re running late. I do remember that when we got to the theatre that afternoon, we arrived 30 minutes before the show, and got a round of applause for actually turning up. It appears they were just starting to worry about our whereabouts. Oops.
Anyway, onto the cards.
All the images were located via Google Images – I’m sure Disney would have a major problem with me using an image of Tink, but never mind, eh? It’s not like I sold them. I took basic images of Peter Pan, Tink and the Dames, matted and layered them with coloured and/or metallic card (or glitter, in the case of Tink), mounted onto either square or A6 cards, and then added card candy, ribbon or peel-offs. Or any combination of the above. 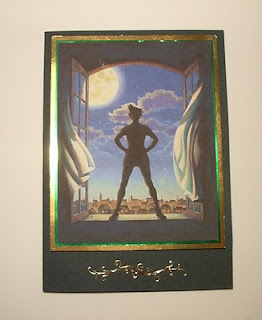 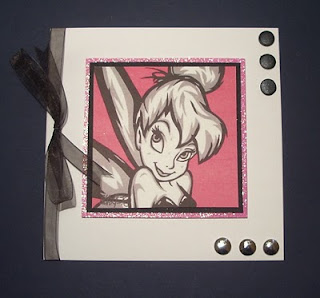 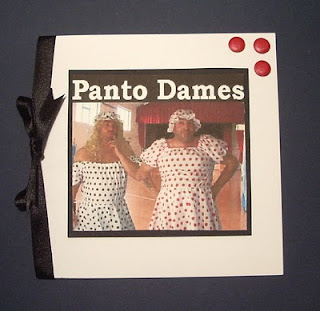 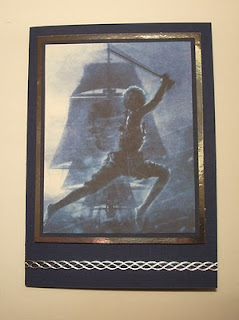 The two missing cards were for Smee and Starkey . So, for Smee I used a picture of, well, Smee, and as Starkey played a very camp gay pirate, I found an image of a rainbow flag with a black skull and crossbones on it. Perfect! That one was teamed up with plenty of pink, as that’s what was in his costume…

They all seemed to like them though, and I enjoyed the challenge of churning out as many as I could in the shortest space of time -  6 in 90 minutes!
Rambled madly by Morti at 12:56 pm