Bursting with Pride, and bunting....

Well, I said I'd be back to tell you about a card my..... gosh, need to find something to call her..... stepdaughter is the closest I can come up with but I'm not exactly married to her dad!  Anyway, on Saturday, Little Miss B had to make a thank you card for her Godparents for her birthday presents. Mr B went into school ultra early that morning, leaving me in charge, with strict instructions that there was to be no Wii-ing *rofl* until the card was done.

So we got up, got dressed, sat in the craft room and I asked her suitably leading questions as to exactly what she wanted to make - what did she want to put on it, what colours did she want to use etc etc.

Now, I need to point out that Lil Miss B had, up until this point, never used a rubber stamp, had no idea what EP is, and would not have known the difference between pigment and dye inks (she does now) although she certainly knew what bling is.  But we had a crash course in the different inks, and she tried several colourways on scrap paper till she found one she was happy with, she had a go at heat embossing and fell in love with it, and we had a quick lesson on the rule of thirds.

I have to say, she's a quick learner.  A super quick learner.  The only hiccup we had was the ole' depth perception one - you know, where you forget that there's so much more to the stamp you're holding than the wooden bit in your fingers, so you have to hold it higher or you get.... whoops.... new card please... 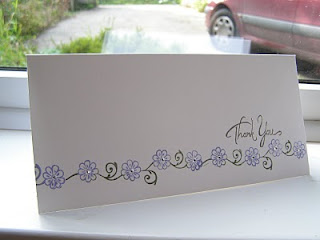 And I am as proud as punch of her and what she's done.  What really impressed me is that it's her own design - she wanted a border of flowers, this was what I found.  Ok, you can see where she's not skilled and we had a couple of blobby bits, and it's her third attempt after the other suffered the whoops I described.  But how cool is that card?

And more to point, she's achieved what Susan Raihala is trying to get folks to do on her Simplicity by Blossom blog - one layer, and one layer only.  Fabulous.  Oh - I forgot to mention, Lil Miss B turned 10 in July.....
The other thing I want to share with you is the bunting I made recently for a swap on UKSTampers.  I like them - I hope the recipients like them too!  I've only got these pics for now, the pictures of each flag individually all need tinkering with as I had to take the pictures in our kitchen, it's got a fluorescent light.... and well, I'm sure you get the idea.  So, for now, here's the two pictures of the whole lot: 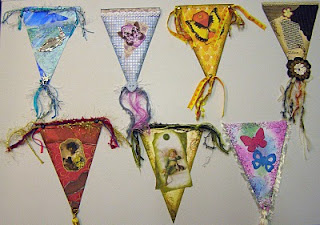 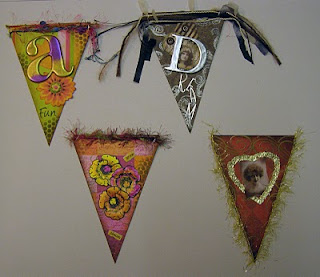 If anyone is interested, I'm sure I can give you a more detailed breakdown of what I did.  One interesting one is the brown one with the silver D on it.  I mixed my own colour of EP for that - it has a subtle sheen of blue because I wanted a more steel colour than silver, and my pewter EP actually had flecks of gold in which I didn't want.
Anyway, I need to go and get on with the day job - TTFN!
Rambled madly by Morti at 8:27 am

They look way better in the flesh i can tell ya :D

Fab and simple card !!! Loving the flags too !!

What a brilliant card! Your little friend has a great eye and excellent taste! Thanks for sharing her lovely art.

Fabulous clean and simple design from Miss B there, absolutely love it! Great bunting too, lots of lovely detail.

Thanks for visiting my blog. My catalogue has still a way to go but it's good to flick through it and know what you've got, especially those long hidden stamps I might not have used in ages.

Your projects are fab and the card your stepdaughter did, wow give her a big Prosit. Also a big applause for her teacher. Well done both of you.

That is a gorgeous card. Exactly the kind of clean and simple design that requires a lot of talent to pull off. Kudos to the student and the teacher. (And thanks for stopping by my blog. I'm glad I made you laugh!)

great buntings! and how nice to pass on the love for crafting to a fast learner!