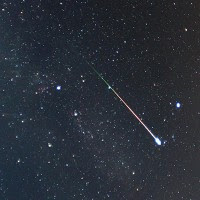 Ok, so I may be a muppet. But it was worth getting out of bed for at 11pm last night to stand in the garden in my dressing gown craning my neck at the sky. Mr B & I only stood out there for around 20 minutes, but we saw approx 1 shooting star each minute we were there. (Thank you Evening Standard for the photo!) I'm definitely going to make a note on the calendar for next year!

The sky itself was crystal clear. I've seen clear skies before, mostly over Wiltshire when we've done events here, but last night was the brightest and clearest I have ever seen it, I think. We could see satellites coming from various directions (must have been perfect timing because we saw about 6!) and the Milky Way was just beautiful.

Ok - like they say on the advert, here comes the science part. For those that are completely unaware (and I'm sure there are a few), last night's meteor shower was the Perseid meteor shower. Every year, between July 24 and Aug 24 (or thereabouts) we pass through this meteor shower which is caused by debris from the Swift-Tuttle comet. It has a 130 year orbit of earth, and was last seen in 1992. Last night was the peak of the shower, and they were predicting up to 100 meteorites an hour. I wasn't quite foolish enough to stay up long enough for the whole light show, as the best part was probably around 2am. (I DO however remember waking up as a small child aged about 8 and seeing this exact same meteor shower from my bedroom window towards the east and the crack of dawn. Why do I remember it? Because I'd just read The Great Glass Elevator and was amused to consider that they could be Vermicious Knids.... although I knew exactly what I was looking at through my window. It is an image though that has stuck with me all my life, it was that spectacular).

One point of note - the Swift-Tuttle comet is considered to be the single most dangerous object to humanity. It is reckoned that it will impact with Earth in around about 2000 years, give or take a century... ulp!
Rambled madly by Morti at 8:22 am

oh im gutted now.. i love gazing up at the stars but didn't know anything about this happening..i'll have to jot it down on the calender for next year!