Well first of all, I have to say whoops... too much time has passed since I last blogged. Now, I'm all for blogging without obligation (must get that blinkie!), but I still think that nearly three weeks is a bit much. Shame on me. My apologies.


Guess what I did at the weekend?


The unbreakable is..... breakable.

Nope. Nothing so exotic. I was using it .

I guess this means I'm pretty strong. Or at the very least, stupid and strong.

Here is where I point out that the demise of the Sizzix was a gradual process. It started a few weeks ago, with a klutz attack. I put a Cuttlebug embossing folder on the cutting mat, ensured I had all the relevant adaptors attached, slid the mat under the pressing bar, applied pressure... et voila! CRAAAACCCCKKKKK. Further inspection pointed out that I didn't push the mat far enough under the bar, resulting in uneven pressure, which made the bar go a bit wonky (like the technical description???) and ultimately, the red bit split on the back corners. 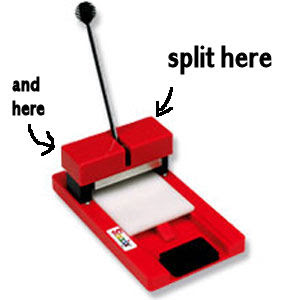 It then started to ooze an oily substance....


So, finally, at the weekend I used it a couple of times - and it gave up the ghost. No pressure. It did the Sizzix equivalent of NOT fighting its way out of a paper bag. It was a bit like the original Mr Muscle guy... In fact, you could even say that it bled to death....

Which of course means...

Watch this space. I feel a Big Shot coming on.

Diane, funny but sad at the same time !! I use my sizzix for embossing with the folders...so I will take care in future !

Awww, poor old Sizzix - hope it gave you many moons of good service, though!

Awww poor Sizzix, but good cos now you can get a new toy.... lol. I have the big shot and use it for all die cuts and embossing folders, good choice I'd say.

I'm from Holland.
I broke mine last week. I was trying to get some nestabilitier through it.
I broke it in two halfs.
I now bought a cuttlebug, and it works fine for nestabilities, sizzix dies en cuttlebug dies.