The other thing that I mentioned in one of my earlier posts (that is, late March) was that I'd started a new job. As of this coming Tuesday, the 19th, I will have been there for three months, and boy has the time flown!

I work for a company based in Fordingbridge, Hampshire, called Corintech Ltd. They are an electronics company, mainly dealing with microchips and printed circuit boards. My role there is - to many - quite dull and uninteresting, but I'm reasonably content. I'm an accounts and HR administrator, and it's a varied and interesting job. I mostly help with the purchase ledger (that is to say, the invoices and stuff to do with whatever we buy, rather than what we sell) and the payroll. I also deal with all the paperwork to do with contracts, recruitment, training and some of the not-so-nice aspects of human resources.

So there you have it. That's what I do for a day job.

Evening wise, I'm currently working on a stitch-a-long with Willow Crafts forum. I'm terribly behind on it though - we're doing a series of small stitched pieces based around the months of the year. Everyone else is either in the middle of, or has finished June's piece. Me? I've just started March's! Oh dear.....

I've also got to do a birth sampler for a friend. Her youngest son turned one this week, and will be having his christening in October. I've got as far as washing and ironing the fabric, marking it out to find the centre, stitching it onto the frame, photocopying the chart, and sorting the threads I need. Now I just need an extra day in the week so I can commence stitching it. I just want to get a little bit caught up with the SAL first..... ho hum. Place your bets now on whether or not I get it finished in time!

Tomorrow is going to be a tough day, as we're taking our oldest dog (Mugsy) to the vets for a check up. He's 15 and a half now (we're talking halves! Ulp!) and sadly is physically going downhill. He's a bit deaf (possibly selective only), eyesight is not as good as it was, he has weak back legs (drags his feet, literally not figuratively), is suffering from occasional incontinence and has almost permanent diarrhoea. That is not to say that he walks around pooping non-stop. It's just that when he does poop it's not a pleasant experience for all concerned, including him (remember the weak back legs? Can't stand for too long in one position either!), and we've tried all sorts of remedies. Bio yoghurt (vet's idea), rice, chicken, egg, no food for 24 hours, different food. To no avail. Occasionally we've got up in the morning to discover that he's wee'd or pooped in his sleep - and is still laying in it sound-O, not even aware of what he's done! It's getting to the point now where we've had enough, and I think he has too. Mind you, having said that, the front half of him seems to be doing fine. The other day, someone even asked me if he was the youngest of our three dogs! Personally I think they need their eyes checked! Sadly though we have to make a decision on how long to continue this tacit torment of him - and the decision needed is whether or not to put him down. We don't want to, so we're hoping and praying that the vet will have some other suggestions, or failing that some antibiotics, that will help. Hopefully I might get on here tomorrow some time to update you on how it goes. 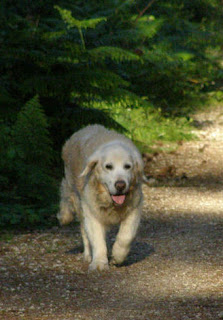 Update!
The vet has agreed that Mugsy will probably not last long, but until that point we have been provided with enough pills and potions to either chemically preserve him, or hasten his end. I suspect the vet believes they will do the former, but who knows. So, mate, you have a month.....
Rambled madly by Morti at 10:23 pm