Greetings and salutations, lovely deskers. Welcome back to another round of WOYWW, hosted by the lovely Julia over at Stamping Ground.  For all the deets check here, but do have a read below first!

I have been somewhat AWOL for the last four weeks.  Sincere apologies. Life kind of got in the way, not least with the ailing health of my father in law which culminated in him passing away on Easter Sunday, the 4th of April.

Bill had Alzheimer's, and was heading into the last stages of it.  He'd got to the point where he - like small children are wont to do - would spit out any tablets he was supposed to be taking, or would hide them in his mouth and throw them away.  This wasn't good for a man on heart medication, but became a much bigger issue when he needed antibiotics for a urinary infection.  He ended up in hospital on IV antibiotics, and did rally, but then as is all too often the case developed pneumonia.  As he had a DNR in place, he was allowed to slip away in peace with the nurses making him as comfortable as possible.  His funeral is on the 21st April.

Now, those of you who know my family (or indeed have seen on FB), will know that my in laws are up in Liverpool and we are down in Cornwall.  So there has been a bit of to-ing and fro-ing, and there will be next week.  Poor Miss B is at Uni in Exeter, too, and her dissertation is due in on the 28th April.  I believe she's applied for an extension, as Granddad was a special man in her world. 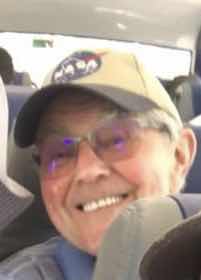 We've also got a camping trip coming up, a social with fellow reenactors in preparation for the re-enactment year slowly gearing up.  The dogs need breaking in to the whole concept of tents and campfires so this should be interesting!  It'll be good to meet up with our Domus Lunaris family, and a few others we know.  I'm sure I'll have some photos to share later!

Anyway - you've not come here to see me witter on about family news.  To the desk! 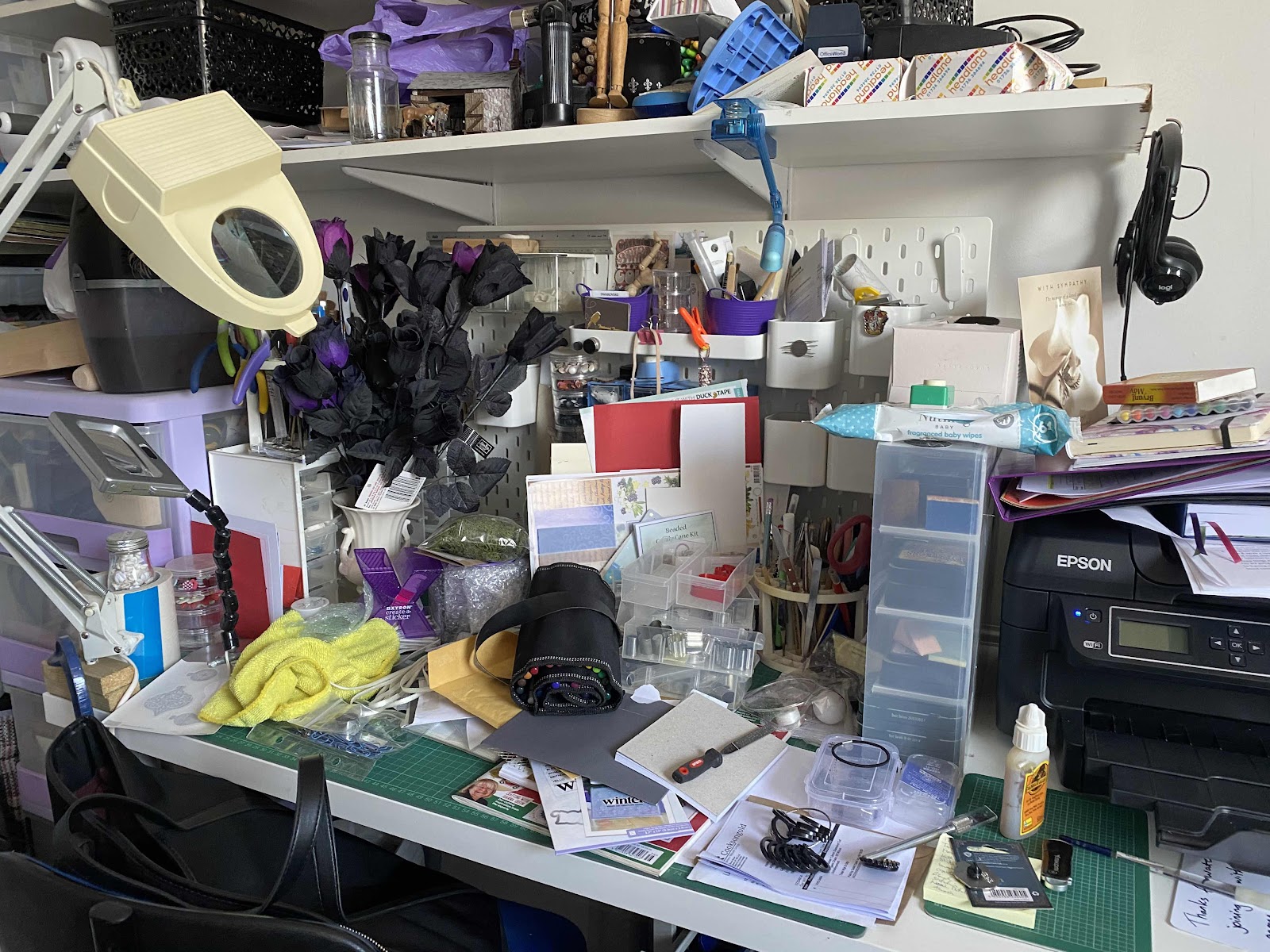 Yes, not much has been done this month.  There's been a bit of stitching but not overly much.  Well, I say that...

In my last blog post I mentioned that the March Mayhem didn't go according to plan?  It failed miserably.  I finally finished off the sassy spider... 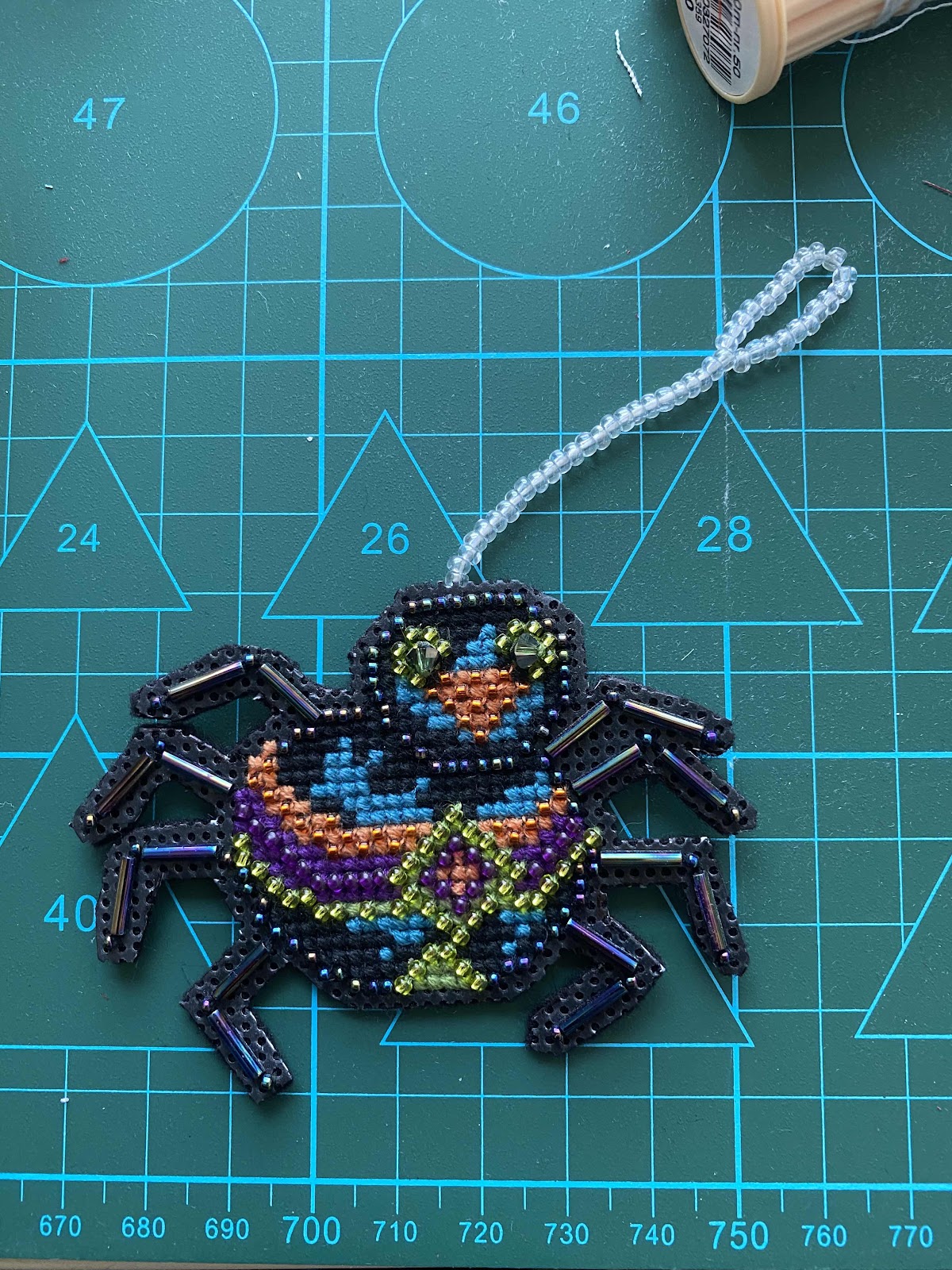 He now has a hanger.

And started the next Mill Hill Kit.... 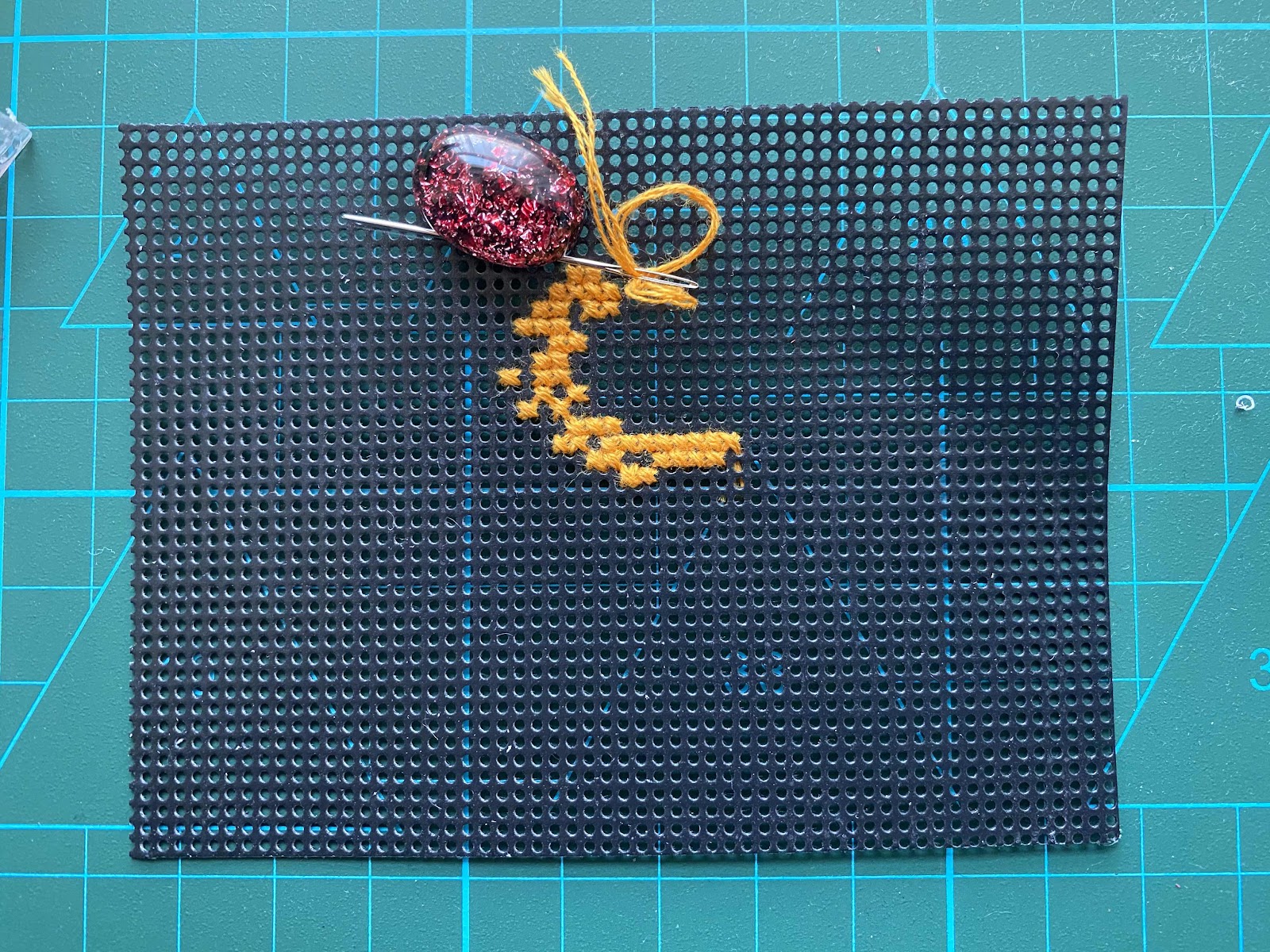 And that was it.  Can you tell what it is yet?  LOL

I also finished the Hardanger!  Suggestions on what to do with it, please... It's too small for a tray cloth, too big for a scissor keep.  I could frame it but I rather suspect it's going to end up languishing in a box somewhere. 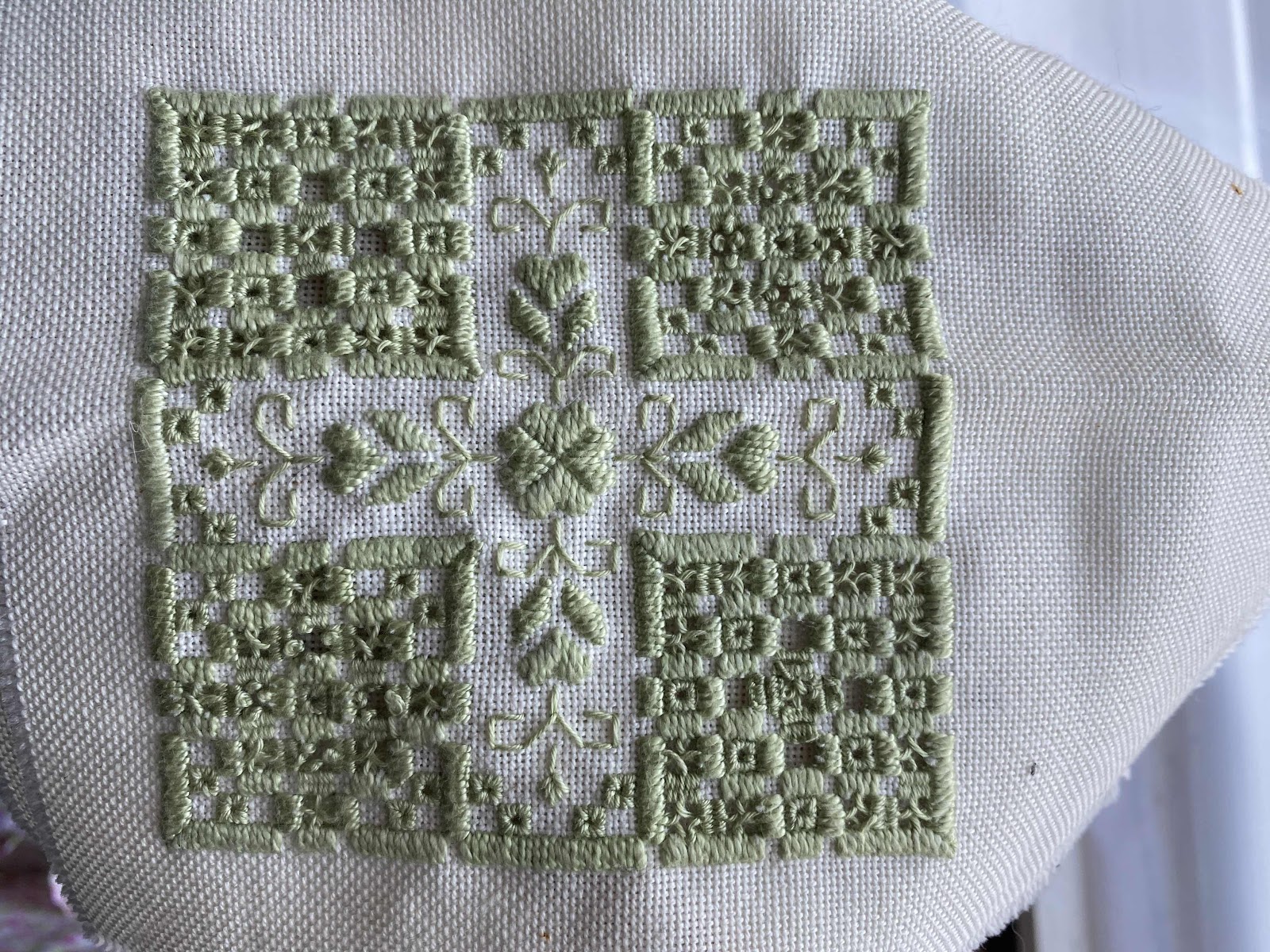 The Peppermint Purple SAL has moved on, but is still behind... 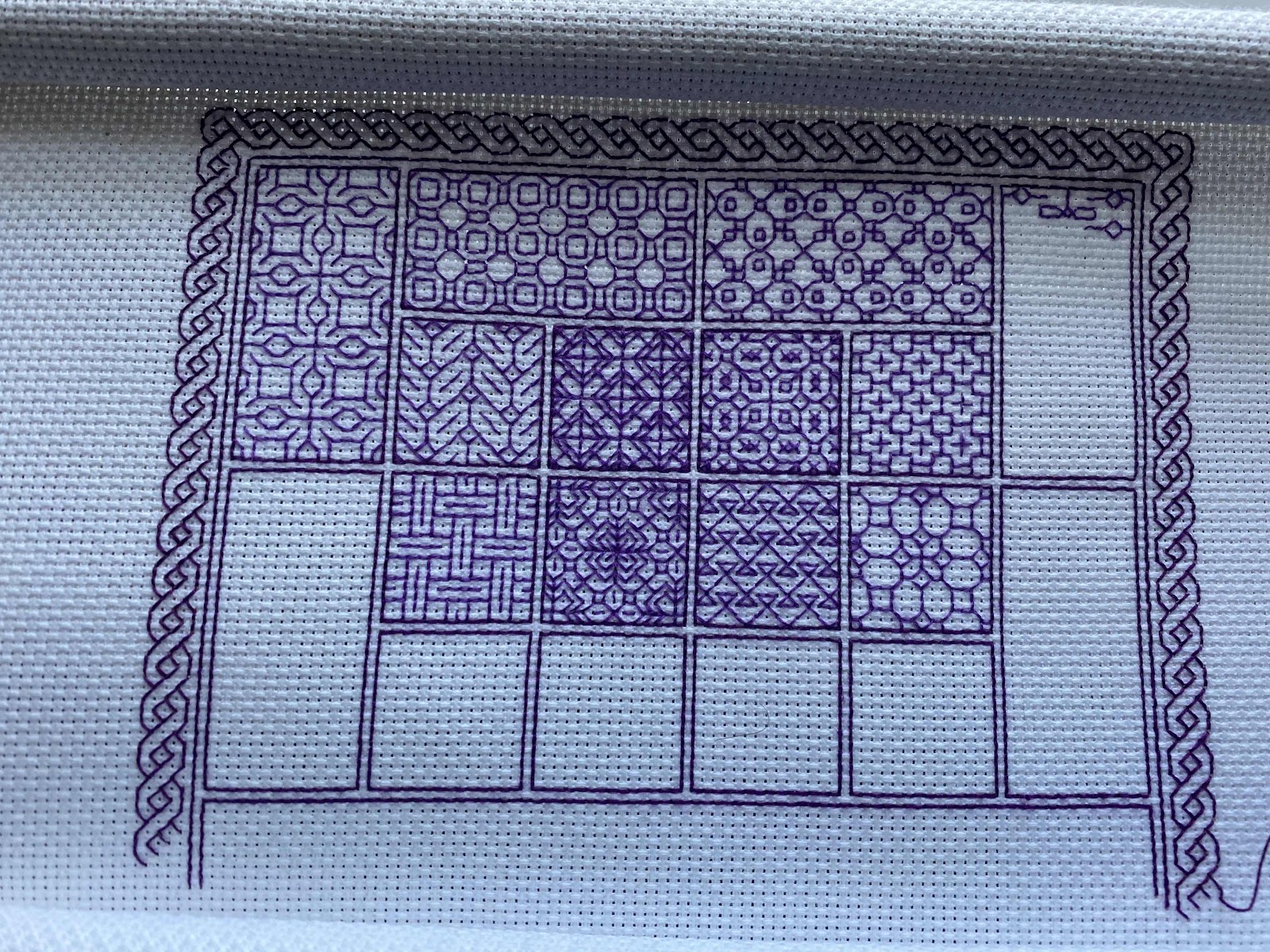 The Moose on the other hand has moved on a fair bit... 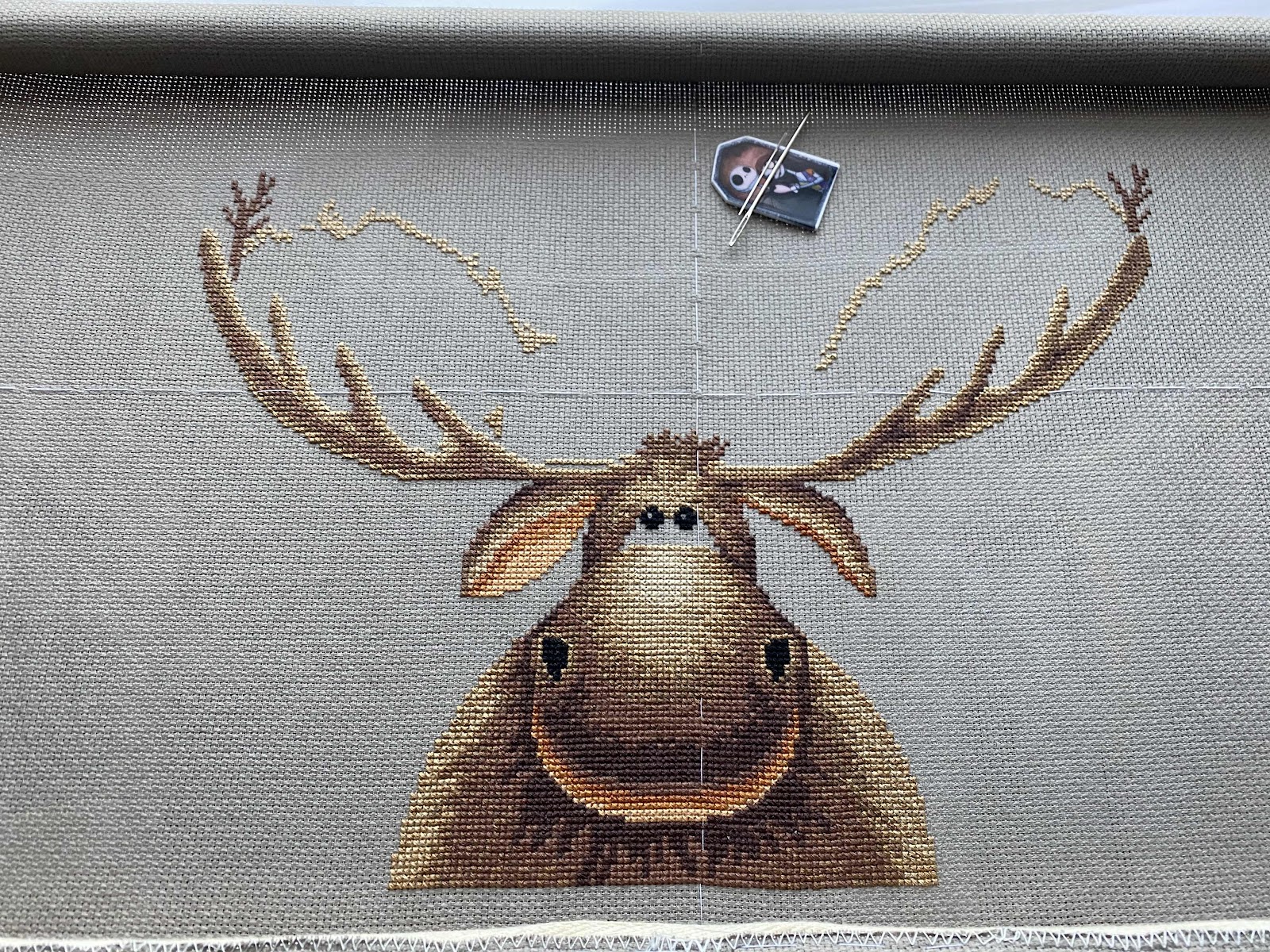 and Siren's Lament has had some notable work done on it! 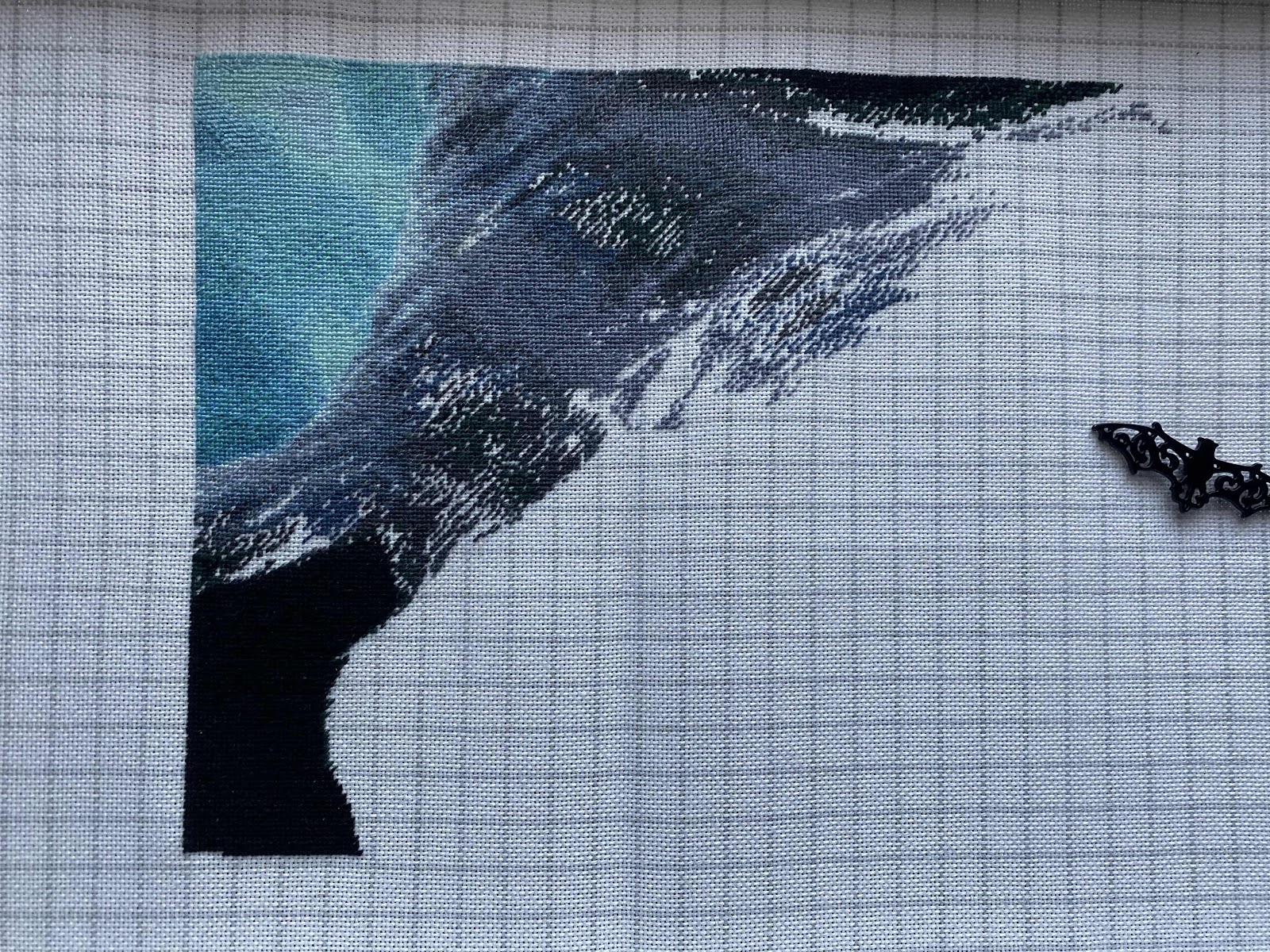 The last round of Myth & Magic Stitch Wars really took it out of my team - it was stressful (but fun) and has left us debating continuing.  It doesn't help that FB isn't geared up for that sort of thing and was very glitchy, so the organisers are now trying to move it off FB and onto other platforms but we're not sure it'll work.

It's Mr B's birthday on Friday, and I've made something for him but can't share it here for fear he'll see it.  I mean, he rarely looks at my blog, but this would be the one time, ya know?  I’ll share it next time!

I shall love you and leave you here.... Happy Hopping!

So sorry to hear about your father-in-law Diane. Hope the funeral goes smoothly and Miss B gets her extension for her dissertation. You have managed a great deal of stitching under the circumstances. Stay safe and happy WOYWW. Sarah #7

I was so sorry to hear about David’s dad, it sounds like a blessing that he was let slip away in the end but that doesn’t trivialise the upset and shock. You must have done some proper mileage over the past few weeks, it seems only yesterday that I seemed to be permanently driving back and fore along the M4, first for my mum, then my dad, bless ‘em. Your cross stitch is fab, I love the way you take on such varied projects. The square green one should be framed, there’s bound to be a cheap one in The Range or something - it is simply too lovely to be in a drawer.
Hugs LLJ 5 xxx

I'm glad Bill had a peaceful passing -I think that's the best out come any of us can hope for at the end isn't it? Lovely to see your moose face again and growing rapidly (which is a sentence that I never thought I would say!) Could the greeny cross stitch be added to a coordinating fabric to make a cushion front? Stay safe and keep smiling, Lisa-Jane #8

I hope the funeral goes off as well as it can in these weird times and that Miss B gets her dissertation done. Considering all you've had going on, you seem to have accomplished a fair bit. Happy Birthday to Mr B. Helen #2

Loving your busy desk and the spider is brilliant. I absolutely understand how you feel about your father-in-law it's been a difficult twelve month and we lost my father last year, he would have been 94 this June but thank goodness he didn't suffer for long and was only in hospital for two days. I'm late today as we've been sorting mum's second vaccination and hearing test so at least we've got that done which is making a bit more settled. Have a very happy and creative woyww. Hugs, Angela x17x

My name is Cindy said...

Some lovely stitchwork there Morti, I really like the Hardanger but sadly I have no suggestions! Sorry to hear of your FIL's passing, I'm sure it's been a difficult time for the family especially with the distances involved - no wonder you've been AWOL. Have a good week, stay safe, stay well, love n hugs Cindyxx #12

Sorry to hear your sad news - a loss around any sort of holiday is so hard, and the following years bring it all back up along with the joy of the celebrations. I do love seeing your stitching and despite the sadness that moose forces a smile! He's wonderful.
Be well,
Socially distanced knitting in the garden yesterday so TODAY is WOYWW for me!
Mary Anne (3)

All your projects are lovely. The Hardanger would be fabulous framed. Beautiful work. I am sorry about your father in law. Alzheimer’s is an awful thing for both patient and family. Sending love Angela #9

I am so sorry to hear about your father-in-law, Morti. Very sad to watch them go downhill with dementia - we had this with my Dad. Also very difficult with all that travelling involved, too.

Your embroideries are coming on splendidly - nice to see Mr. Moose with a complete face and antlers! He is very handsome. I can't think of any particular use for the Hardanger yet but will have a think. It's so pretty, as is the "black"work piece too. It's nice to have several pieces on the go at once, as it keeps you fresh.

Oh Morti, so sorry for your loss. My poor Mama has been in the grips of dementia for the last ten years and believe me, there are other, tear inducing stages after the part where medication and stubborn free will collide. Liverpool is a long way from Cornwall, but no doubt you took all of this into consideration when you moved; my sister’s been doing the decision making progress for a similar move and there’s so much to consider and get your head around. Won’t it be fab to get the tent out and meet up, so much to look forward to. That hard anger is just beautiful, please don’t let it languish! Someone with a better brain than I will come up with something. I’m useless at seeing it’s real size so have no clue! Argh to a stitch along being stressful, what a shame. Do I feel a rebel break away group coming on?!!

So sorry to read about your father-in-law.