Hellloooo!!!  Here we are again!  Another round of What's On Your Workdesk Wednesday to amuse us and get us over the hump of the week.  For all the deets, head on over to The Stamping Ground where Ms Dunnit will tell all and offer up Mr Linky so you can join in.

My desk this week has some new Copics on - more on that in a mo.  Yes, I know I've pledged to Use it Up for 2012 but surely that only applies to consumables?  Copics are consumables?  Darn it....﻿ 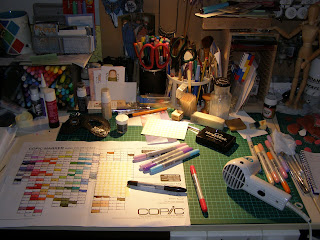 The wrist is much better, thank you Shoshi for asking, so I've done a couple more squares (not in the pic).  The tissue box is now out of sight cos it's starting to look like something and I don't want someone seeing it....tee hee.... The mask hasn't had very much done to it - I've just triple embossed the cogwheel/eye with my own concoction of pewter and midnight sapphire obsidian embossing powders.  Looks fab - like rusty steel.  It's definitely going to be a freakiness on my wall once done.  He's not my own idea - I've magpied him from Snazzy Stamping  (where I spotted him on a visit) - and you can see him here at Inky Exploits. 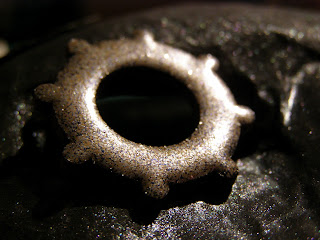 Back to the Copics.  Now, I'm sure someone, somewhere, has already had this idea and done it, but I've not actually seen it on a blog.  I store my Copics in a cube, and there's no decent way to separate them into colour groups.  It's just a general mish-mash of shades in a group.  I'm too lazy to make a proper storage facility, but even if I did I wouldn't be able to pick out the exact three colours I need according to their shade number.  One of my biggest annoyances is that the Copic Sketch pens have the number written on the cap, but not the Ciaos.  Then it occurred to me to write the number on the lid myself.  Except you can't properly, because there's a dimple in the middle.  Cue the 8mm diameter label.  Colour it in with the colour your labelling, write on it with a fine tipped pen, and slap it on the end of the pen.  Voilà!  Now my pens go in the cube, and I can pull out the exact shade I require according to its number.  Cool or what?﻿ 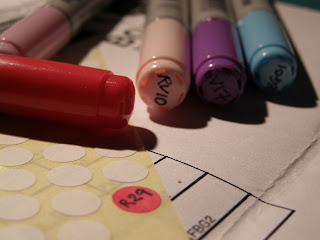 Now, unless you've had your head in a bucket for the last 5 years, or maybe if you live somewhere a long way away, you might not have noticed that this little island somewhere right of the Atlantic, has got a small sporting event coming up.  Last Wednesday we got the opportunity to go and see the flame as it stopped in Salisbury for the night.  One of the girls in Lil Miss B's netball squad from school was carrying the torch, but we couldn't get into town to see her do her stretch of the run.  We got there in time to see the last handover, and Mr B hopped up onto the fence to get some fab photos for me.  I won't bore you with loads - just this one:﻿ 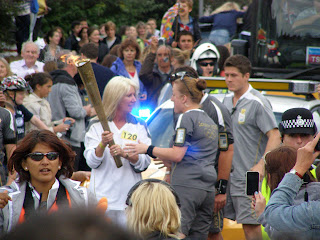 Lastly, last week I made some noises about a special event we might have been going to, and we actually did get to go.  We were fortunate enough to be invited to go to Tidworth Polo Club for the biggest match of the year - the Hackett Rundle Cup.  This is when the Army and Navy battle it out on horseback, chasing a small ball round the field.  We were invited because Mr B happens to be teaching the son of the Navy team's coach!  This year, we weren't as lucky as previous years had been - normally HRH Prince Harry (the Queen's Grandson) plays, but he wasn't here this year, more's the pity. 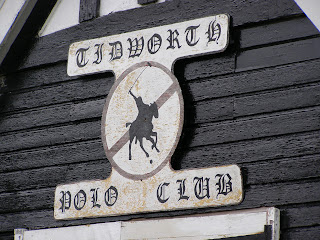 I managed to get some really duff shots, and some not so bad ones - this one came out ok, I think.  My camera isn't really built for high-speed sporting events.  One thing we definitely were lucky with was the weather - it held out right to the end...and then the heavens opened. 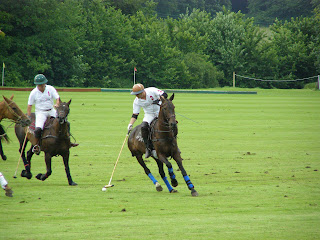 am packed and ready

argghhh - October is AGES away

I've never been to a polo match - it looks fast and furious!! How exciting to have been invited. I bet there were loads of sleek, muscly specimens.... the horses weren't bad either, lol!!

Like the look of your metal cog wheel, very effective!
Hugs, LLJ #70 xx

Do you go out and stomp the divots back into the ground, only been to one polo match, in Hawaii of all places! So looking forward to the Olympics, how exciting it must be for you to have them so close! waving hi from the hills of North Carolina where I cannot sleep and it's 2:57am..::sigh:: #50

Looks like a busy time around your house! great looking desk looks very creative and busy! Hope you have a great week. Vickie #67

Great idea with your pens, like that one very much. Pity you did not get to see the whole of the torch, I am so excited about it all! A polo match - wow, even without the lovely Royal I bet it was great fun. Thanks for stopping by, Anne x #9

Polo is so not my thing. Not a cricket fan either, but any sport that has a lovely long tea & cakes break gets my vote :)

I need to know more about the cog - maybe at the next crop? :)

Oooh lots going on with you today - love that cog. Seeing the torch relay was fun wasnt it - very exciting in my small town! Thanks for sharing - Sunshine Girl No. 58

you are welcome to potty stop -

glad I booked by bed for real not just in my head not sure which play mate is coming with me,

I am in Kent in Sept and up Norf in August, so twill be oct before I arrive - with one other ( i will be definitive by next weds I hope)...

oh you can call in at the w/e yes you can, but one of our two dogs is a rescue staffy and he gets very frightened & therefore aggressive with new beasties...

and he is cantankerous, he sat down on the park today and refused to move - went to bloody sleep and I had to wait 20minutes till he decided he was going to walk again, - anyway Bob (the proper dog) played ball with me whilst we waited for old fart breath to wake up ...

why have you got a horse on your desk this week - oh - I see you were hob nobbing...

gawd you are not posh are you??? I spill food down my front....( tis a speed issue not a mouth size issue)

ffs - no need to publish this one , I actually only came back before to tell you - right click - open- to zoom into my images - on the mac you just tap scroll to zoom, on a pc I think you use a zoom command on the toolbar?

right that really is it, no more comments

Hi Morti - I used to live in Tidworth when I was knee hight to a grasshopper (Army brat that I am) I have done a similar sticker thing on my pro markers and my Distress Inks and it has the added benefit go showing the true colour. WOYWW Hugs from Helen 18

What a great post, Morti! Full of interest, both sporty and crafty. Love your organisation with the copics and their labels - that chart looks amazing. I love the rusty steel gear wheel - these faux effects are soooo cool to do, aren't they! Really looking forward to seeing the completed mask.

I'm so glad your wrist is feeling better now. (Thanks for the link to my blog, by the way!)

Smart idea to label your copics. I use the sketch. Polo, I would love to see a polo match. Thanks for stopping by. #30

Oh I am such a fan of the Prince, pity he was not there and I love your copic marker sticker idea. I have done it to all my paints and inks in my workbox so I can see what colours they are from above.

fab eye! lol! great photos. Went to a polo match in Buffalo, NY state when i was at Uni and doing summer camp abroad. Many many moons ago.
caroline #63

I like your colour chart and your organising idea. I would be overwhelmed by all the colours and never be able to make a decision. Looks like it was gorgeous weather for the polo game. How exciting with all those olympic hopefuls getting ready for the games.
Sandra @31

Thanks for your lovely comments Morti! Glad you like what Shoshi's up to these days!

Sorry you don't want my Cricut - if you hear of anyone who wants it, please let me know! Full deets in Shoshi's Blog Shop.

oh well then here's another - Niall said he and his toe snails will definitely stay in our bed he would not wish to deprive a woywwer the bed space...will call Jo tomorrow and see if she is coming with me...
dx

Great newsy post with exciting polo, cogs and copic storage well organised. I'm wondering where I might or might not, can or cannot be going! Can't wait to speak to Donna now.
You'll love the nail polish... it's magic and everyone I see asks about it and loves it!
Slovenia is magic for a holiday.... just GO
love Jo xx

Of course Copics aren't consumable. They are forever because they are refillable. So that makes them more like a tool, a necessary tool. Someone once gave me a .pdf file of little circles with the Copic numbers in them, so you would punch them out and attach them like you did. Like you, I colored mine except for a couple dark ones. I really helps to have them marked!

I like your triple embossed cog. How do you hold it to emboss it though? If you don't hold it, how do you keep it from blowing away? Sometimes it is these simple things that stump me!

Whatever you and Donna are planning has made for interesting reading in the comments section!!! I'm hoping we'll need a world wide distributor and then I can retire in style and keep myself in stamps and pretty paper for the rest of my life, lol! I won't settle for anything less! Have a great weekend.

greta post, love the cog.
I saw the flame go past in Winchester ... stood in the shop window during my lunch break LOL.
got some very strange looks from passers-by.
The polo looks like fun
have a good week
janet #68

I'm back! I have posted the schedule for the Great British Blog Hop here http://www.sunshinegirlnicola.blogspot.co.uk/2012/07/great-british-blog-hop-schedule.html if you have any questions get in touch - thanks for joining in!

Woo Hoo! I see you are taking part on the British Blog Hop on Wednesday and Thursday! See you on Wednesday!
BTW....Green with Copic envy! I agree with you, you can buy more as you need those to stretch your papers you are using up!

Hello! dont forget there is only one more sleep to the Great British Blog Hop! Thank you so much for taking part - you aren't due to post your creation until Thursday so one more day left to think British and get creative! whoo hoo. See you then!