Just a quickie for WOYWW from me this week.  There's no desk photo - there's no point.  My mojo went on a hike.  Or maybe it was just too cold-saturated to raise its weak and weary head to do anything creative.
In answer to a couple of recent questions:
No, I didn't get the part of Ma Larkin, but that of Edith Pilchester, the nervous 40-something who wears tweed and occasionally gets her tonsils tickled by Pop Larkin.
No, Mr B did not manage to get his thank you cards made.  They're still not sat next to the 'With Regret' card I haven't made.  It's been that bad this week....
But!  I did manage to finish the Hong Kong card and I figured I could at least share that with you....﻿ 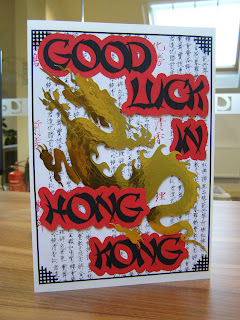 I have to say, I love it, and it has drawn several WOWs of approval from the folks at work.﻿  V. cool!
Lastly, I want to share with you what I consider a lucky escape.  At about 1am on Sunday morning, Mr B and I both woke up having been disturbed by a bang followed by two smaller thuds.  He sat bolt upright in bed, looked around a bit startled (at least, his movements suggested that - it was pitch black) and flopped back down into bed, soon to be snoring softly.  I laid awake for a minute or two, wondering what it was, figuring maybe the shade had popped off the wall light, and then having ascertained that the world wasn't coming to an end fell back to sleep.
Next morning I discovered this.... 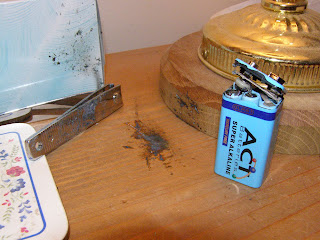 Seems that when I slid my watch onto the bedside table before turning the light out, I must have nudged the battery (which was on its side) against the nail clippers.  The resulting short circuit overheated the battery and BANG.  The two smaller thuds I worked out were after the battery shot across the cabinet, hit my watch which fell onto a book (thud) and then bounced off that onto the floor (second thud)﻿.
Someone must have been watching out for me - this all happened about a foot away from my face...... ulp.....
Catch you on the hop!
Rambled madly by Morti at 12:10 am

Gosh, what an unusual happening in the night - so glad you were safe. Hope your crafting mojo returns soon. The HK card is great - (Hazel, WOYWW #10) x

your card is beautiful and what a narrow escape, I will be watching where I place batteries!
Happy WOYWW, Debxx #8

Sorry your mojo is awol. hope it returns soon, and you must of had the angels on your side with that battery.. glad your ok x
Are you going to exeter C4C show this weekend?

Holy cow, Morti. Someone really WAS watching out for you. I have to give you a big HUGE WOW for that card. I love the dragon. I need one for my Chinese New Year card I want to make. Better late than never, right? Happy WOYWW and drop by if you are interested in taking my free altered book classes. I'm # 30 this week.

that is a great card! perfect for the theme. and wow, so glad you are safe.
happy WOYWW, and thanks for sharing!
hugs,
peggy aplSEEDS

Oh my goodness...how scary. My Mom lived in fear of this happening and hated batteries in anything...I am glad you shared the picture. I have never seen anything like it...pretty scary for you!

If I remember rightly, Edith Pilchester was a smouldering volcano of passion under that tweedy exterior!! Lol :)
Sorry you've been so poorly, really hope you feel better soon...
And next time you decided to indulge in some home ballistics, retire to safe distance first!!
Hugs, LLJ #68 xx

Oh that was a lucky escape! Fab card.Hope you enjoy this WOYWW. Zo x 89

Puts new meaning to the phrase "Things that go bump in the night"!!
I can imagine what that was like! Scarey!! eeks!

So sorry you've been feeling poorly...sounds like your mojo has come out in sympathy with you!

Beautiful card Morti! Scary thing having the battery to explode so close to where you were sleeping. I was in the craft room and heard a noise the other night but didn't think anything about it until the next day when I found out my card had been burgled! Scary stuff these days! I am offering up some blog candy so come leave a comment on my blog and get a chance to win! Thanks for sharing and have a great week. Vickie #87

Yikes, that is an a close call with the battery. Your card is gorgeous and I am sure you will make Edith blossom under all that tweed.

Hi Morti
luv your card its fabulous, you did have a lucky escape,pleased no serious damage done,thanks for the mooch, happy WOYWW, sue,x(54)

Glad he liked the dragon card it's fab, gosh you did have a lucky escape I have never seen anything like it, thanks for sharing, Hugs May x x x x

aw, I hope you didn't catch mine...I think it#s trying to come back for a third time! it started in November! keep warm and get well soon!
((Lyn))
Happy WOYWW

Good morning miss morti. I think you will make a fabulous Edith Pilchester well done on getting the part.

Well I didn't know that about batteries I will now have another thing to go around checking before bed!!!

Lucky escape, phew, bet that was scary the next morning!!

Happy WOYWW Hun, hoping this posts as I have had issues all week!!

Thank Goodness you are ok, that could have been very nasty, I was looking forward to seeing how your Hong Kong card would turn out and it is brilliant and no wonder you got lots of 'wows' Hope you have a good crafty week Lou E

What a stunning beautiful card !after all the thuds at least your both ok.Sorry your mojo isnt around maybe with being under the wether and all the panto rehersals and show it's just caught up with you .Your body telling you to rest relax and enjoy!
hugs judex55

WOW I love the card, those colours are amazing and just perfect for the theme :)

Love the card--very bright and vivid. And geez, I never knew batteries and nail clippers could be so dangerous!

What a great card - love it. So glad nothing ignited from the battery. That's so weird.

Wow! To both the card and the "bang"! Glad you weren't hurt.

I'm attempting to get around everyone's woyww posts this week (a new one for me!) I don't usually have time to get round everyone.
But I haven't done my own post yet - it'll have to wait til I get home from work this evening.

Crikey, narrow escape or what! Who would have thought that could happen ... not me, and not you either ... I expect you'll be doubly careful from now on and I hope that wasn't a valuable piece of furniture. Love the card - great colours and layout. Hope you have a wonderful week. Elizabeth x #78

I bet you must have had the luck of the dragon on your side! Awesome story, and card. Glad you survived!!

Amazing card. Oh my goodness, that battery thing could have been really nasty.
hugs
Enfys

Love the card, what a mad night!lol. Glad you escaped unscathed though. Shaz

I hate things that go bump in the night - I always go into a panic. So glad all turned out well but lesson learnt about battery care. Thanks for sharing.

Eeek! That must have been quite a rude awakening! But love your card! Kim

Great card! and definitely a close call n the battery hope your mojo returns next week!

That really was lucky! Someone was watching over you.
Great card and I can see why it got Wows.
BTW Edith sounds as if she has a fun life - will we hear more of this?
Thanks for sharing - Hugs, Neet #1512 xx

what a lovely card, and what a lucky escape from that rouge battery.

Thanks for sharing
Becky
160
x

Oh my goodness, that sounds scary! Glad the battery did not hit you on the head!
Love the card.
Happy WOYWW even though its Thursday already!

akk, I was cringing then... that battery could have bopped you in the mush... eeek!!! Congrats on your part... tonsil hockey at the ready then ;o)) loving the Hong Kong card! Sorry am late, doing a mahoosive catch up today :O))

Love the card...and yikes, that was a close call!