About ten days ago we ordered a mirrored wardrobe from Ikea. I'm pleased to announce that it turned up today, and it's doing fine. We were only going to put the frame together tonight, and do the doors tomorrow. However....

Just as I get sidetracked with my crafting and think "just one more... almost done....", so he just had to hang the doors.... He got a bit carried away. I pointed out to DH that the door stops really ought to go on the base runner BEFORE he screwed the runner to the cabinet as he wouldn't get them on afterwards. Except I was too late. Now he's taking the runner off to repeat but as per the instruction book....

Am I so wrong to want to wield a carving knife in his general direction?

You watch. An hour from now, after he's had a relaxing time on the sofa, he'll be moaning about it being another late night. He wasn't going to hang the doors tonight. But he did.

We have mirrored wardrobes.

The one upside to it all is that at least the room seems bigger.....

Oh, and I can now hang all my clothes up - more space to buy more! 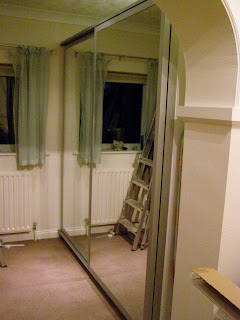 It looks very smart. Have loads of fun shopping!